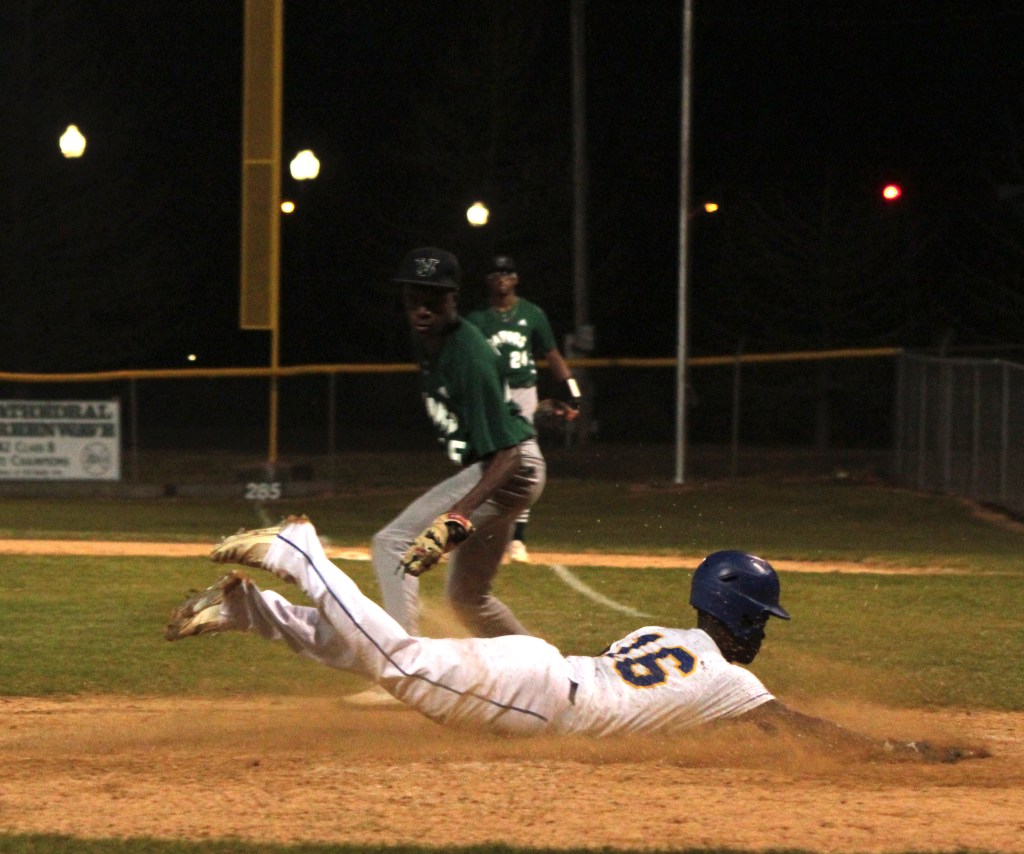 Travon Henry dives into home plate to score from second base. An errant throw by the catcher flew over the third baseman's head gave Henry the chance to score as Natchez beat Vicksburg 10-4. (Hunter Cloud The Natchez Democrat)

A wild throw by the Vicksburg Catcher flew over a leaping third baseman allowing one run to score for Natchez before head coach Dan Smith yelled “go” to Travon Henry as he rounded third.

Flying down the base path, Henry dove towards home plate and beat the throw to give Natchez a 9-0 lead in the fifth inning. Smith said it was his bat and legs that sprung the Bulldogs to a 10-4 win over Vicksburg Monday night.

“He is my lighter fluid. He gets everybody started,” Smith said. “Once he gets those wheels rolling it is pretty hard to get him (stopped) unless he gets a flat. He is small but he can go.”

Throughout the game, Natchez moved runners around the bases through steals and a few double steals. Players were instructed to take secondary leads, and their aggressive play on the base paths led to about 5 runs from a couple of errors and fielders choice.

He said being aggressive on the base paths is the identity of his team as they stole eight basses. He said some of the players came in on Sunday to take optional batting practice, and it showed as the team had seven hits.

Dekaron McGrudger began the game with a triple to score the first run and Roderick Simpson drove in two runs with two hits in two at-bats. One of his hits was a double as he launched a fly ball over the centerfielder’s head.

Devon Winchester struck out 12 batters and gave up three runs in five innings pitched. Smith said he had given him rest. He said Winchester’s leg has been tight, as he would stretch in between innings.

“I’m proud of him because he fought through it,” Smith said. “If we would have made the plays he probably would have went on to finish the game. I didn’t want to push him no more. I was proud of the way he threw today, he didn’t complain.”

Natchez will have spring break off before going to play Vicksburg next Monday. It will be their last game before District play, Smith said.