Mayor: City close on agreement with cruise companies as boats return to Natchez 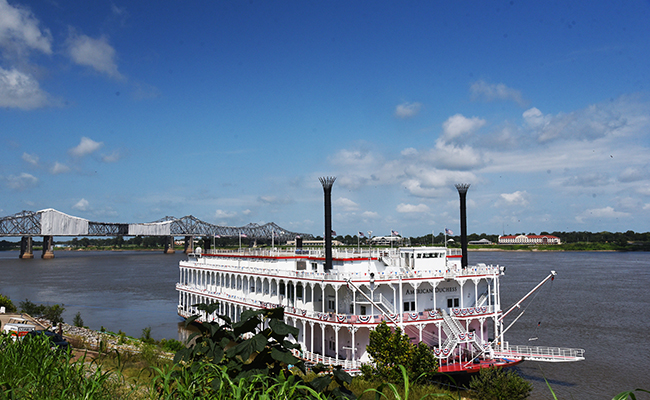 The Duchess docks at a boat ramp near Silver Street. (File photo)

Starting next week will be the boat’s first return to the Natchez since the abrupt cancelation of cruises in the 2020 season caused by the COVID-19 pandemic.

American Queen Steamboat Company’s American Duchess and American Countess and the American Cruise Lines’ American Jazz and Queen of the Mississippi will be arriving just in time for Spring Pilgrimage — a month-long event in which historic homes open for tours that kick of March 13 and last through April 13.

According to Visit Natchez, the docking schedule for the riverboats are as follows:

Linda Smith, marketing manager for Natchez Pilgrimage Tours, told the Natchez Mayor and Board of Aldermen Tuesday that approximately 4,000 tickets for Spring Pilgrimage have been sold and counting since online pre-sales went live last month.

“Not just house tour tickets. We’re creating reservations for hotels and restaurants, for lodging and anyone else who’d like to work for Natchez Pilgrimage Tours,” Smith said.

The tickets sold thus far are equal to approximately $72,000 worth of revenue for the city, Smith said.

Sales have also increased by 25% since Forbes magazine published an article calling Natchez number five in a list of places to visit and avoid the COVID-19 pandemic.

“People want to come to small towns because they feel safe,” Smith said.

“We are very close to having the final map to where we can proceed with finalizing the agreement with American Cruise Lines and with Viking,” Gibson said.

American Cruise Lines was the first to pledge a third of the cost to the raising of Silver Street and the entire building of their dock and their offer is going to be matched by Viking, Gibson said.

Frank Klipsch of American Cruise Lines said the company is glad to be coming back to Natchez in a couple of weeks, adding the company is also supportive of the city’s plan to raise Silver Street and build new docks.

“We currently have four boats on the river, working on the fifth. Over the next couple of years will have a total of nine boats. We’re going to be here a lot. … We’re ready to invest in the city,” Klipsch said to the Aldermen Tuesday.

In a Monday news release, Visit Natchez asked area business owners to consider their operation hours and open responsibly while the boats are back in Natchez.

This would help garner more sales for businesses and give visitors from the cruises “a wonderful and memorable experience” in Natchez, Visit Natchez said.