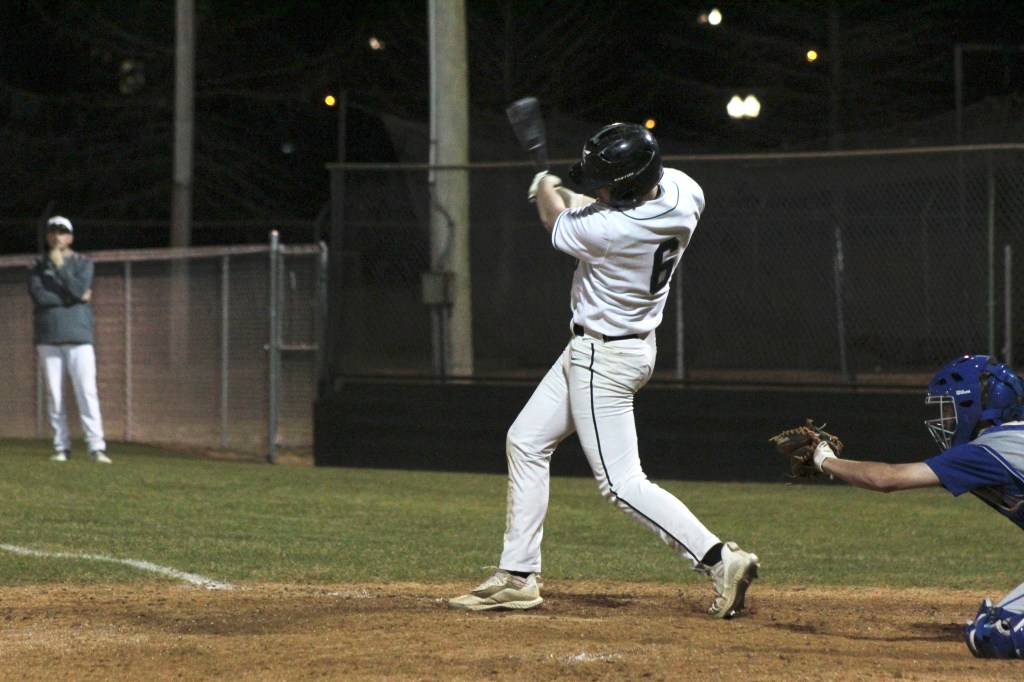 Hollis Lees hits a grounder in the seventh inning before being thrown out at first. Cathedral lost 8-4 in the first game of a three game series with Brookhaven Academy. They will play at BA on Friday in a double header. (Hunter Cloud The Natchez Democrat)

A double into right-center field scoring a run for Brookhaven Academy in the top of the 6th inning was the turning point in the game Cathedral head coach Craig Beesley said. Brookhaven Academy would win 8-4 taking the first game of a three game series Tuesday Night.

The Green Wave began the game scoring three runs in the 1st inning without a single base hit. He said strong pitching by the Cougars retired Green Wave batters and made it difficult for Cathedral to get anything going in the game.

“We had a chance early in the game to add a few runs and we just couldn’t get a few runs across on them,” Beesley said. “We never put any pressure on them in the middle of the game. We have to do a better job of hitting when we go there Friday.”

Throughout the ball game, he said BA put pressure on the Green Wave defense in the batters box and on the base paths. He said the Cougars battled on every pitch, and they put Cathedral in difficult positions with men at the corners.

“You have to work for every out you get, and they are a good ball club,” Beesley said. “They can play small ball, or they can sit back and hit it in the gap. We didn’t execute our bunt defensive coverages tonight and that is where they really hurt us.”

Brookhaven Academy is one of the Green Wave’s district opponents who is a challenging team, he said it is going to be a battle this season. He had hoped to win on Tuesday night because now they will have more pressure to win both games on Friday.

Winning at Brookhaven Academy will require Jake Maples and Noah Russ to have a good outing he said in a double header on Friday. Each series against district teams has a game played on Tuesday with a double header played on Fridays.

In the next few practices, he said Cathedral would be working on not rushing throws on bunts or balls hit to the infield. He said the Cougar’s runners had a lot of speed and it forced some poor throws by his infielders.

“Hopefully we will come out and do a better job there,” Beesley said. “We got to go over there and get that first game, and then maybe scratch our way to a win in the second game.”