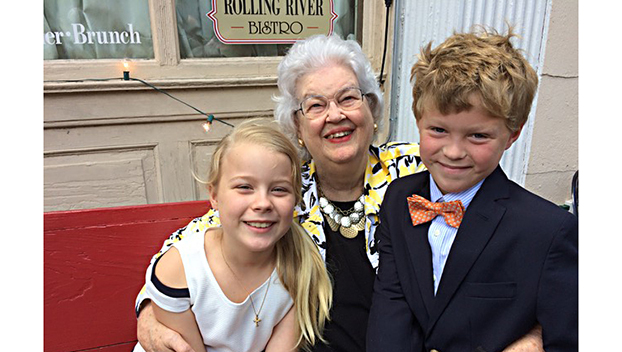 Kathie Blankenstein enjoys a joyful Mother’s Day at Rolling River Bistro in May 2017 with Archer and Alston Doyle, two of five grandchildren. Her other grandchildren are Katherine “Kate” Clearly of Colorado Springs, Colorado, Lillie Vidal Warren of Chattanooga, Tennessee, and Julia Grace Blankenstein of Vidalia, Louisiana.

NATCHEZ — On Sunday, Natchez lost a grand lady — a fierce advocate for children and champion of preservation — with the death of Kathie Boatner Blankenstein.

“She was one of my very first friends when I moved to town,” said Mimi Miller of the Historic Natchez Foundation. “She was a strong preservationist before there was a historic foundation here. She would engage in battle with us to save things.”

One of those first battles was to save the Prentiss Club, Miller said. Deposit Guaranty National Bank, which began as City Bank and Trust, bought the Prentiss Club, located at the corner of Jefferson and Pearl streets, and planned to raze it and construct a drive-through facility.

“If it weren’t for Kathie and her mother, Lillie Vidal Davis Boatner, it wouldn’t be here now,” Miller said. “Like Kathie, Lillie Vidal had that great voice and great personality and sense of humor.”

That effort to save the Prentiss Club included petition drives and public meetings attended by city officials and officials from Deposit Guaranty.

“Lillie Vidal brought a friend of hers who was somewhat new to town to one of those meeting, and I think the woman must have had some money in Deposit Guaranty. The woman carried a cane and I remember the woman going up to the president of the bank and sort of putting that cane in the face of the banker and telling him, you better not take down that building,” Miller said. “It wasn’t long after that that the bank gave us six months to find a new owner. They gave us a reasonable sale price for it and we did find a new owner.”

Miller said Blankenstein was also instrumental in the preservation of the Middleton House on Jefferson Street. She served as president of the Historic Natchez Foundation in 1996.

“She was an absolutely fantastic president. She could tackle anything with a sense of humor. She never made anyone angry because of that sense of humor.

“People would come to the Historic Foundation because they were researching something about Natchez and we would turn them over to Kathie, and Kathie would charm the socks off of them,” Miller said.

Blankenstein’s first love was making a better life for the children of Natchez.

“I think about her devotion to causes and what comes to mind is all the children of Natchez was number one for her. Number two was preserving the historic character of this town,” she said.

Blankenstein’s long-time partner in providing for the needs of children of Natchez was Nancy Hungerford, the retired director of the Natchez Children’s Home.

“I feel like we had a huge volume of Natchez history of the shelf and it has been taken down,” Hungerford said of Blankenstein’s death.

Blankenstein joined the board of what was then the Natchez Protestant Home in the 1970s.

“Kathie was one of the younger members of the board at that point. In 1983, the year I came here, the two matrons who had been at the children’s home for many, many years both retired. Kathie was instrumental in helping that board go to the next step,” Hungerford said.

Ultimately, Blankenstein reached the Palmer Home for Children in Columbus, a Presbyterian facility, where Hungerford was working.

“It was her lioness spirit that got me and my then-husband here and our two children, later turned-three children,” she said. “When I first laid eyes on Kathie, she was in the halls mopping the floors so it would look a little better when we got here. “She wanted the children’s home to be a viable, active, updated, contemporary place for displaced children. Hundreds and hundreds of children’s lives have been affected by Kathie.”

Hungerford said Blankenstein was made a board member emeritus of the Natchez Children’s Home in 2017.

“Kathie was gentile, but could be very fierce when she believed in a cause, and she believed in and loved the children of Natchez. I feel like my right hand has been cut off. But she was ready. She had 90 years on this earth to leave a tremendous influence. She is probably in heaven right now talking to someone about Natchez.”