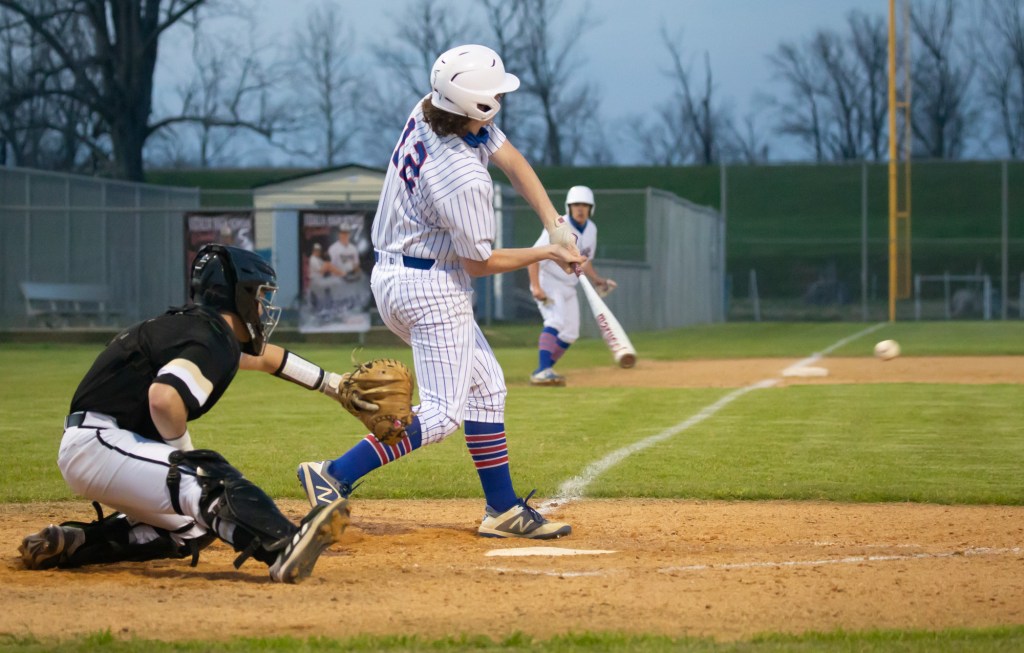 Vidalia High Sophomore Luke Williamson swings and hits a single that led to 3 runs crossing the plate in the bottom of the third inning, bringing the Vikings back into the game. Vidalia would lose to Oak Grove 7-6. (Bill Barksdale for The Natchez Democrat)

For The Natchez Democrat

Oak Grove came to Vidalia with a deep bench and a strong 5-2 record.  Despite the odds, Vidalia forced the Tigers to play ten full innings before falling by one run, losing 7-6.

The Tigers dominated the top of the first inning, scoring four runs.  They forced Vidalia’s starting pitcher Adam Eames to throw 51 pitches over 35 minutes before driving him from the mound.

Behind 4-0 in the third inning, Vidalia sophomore Luke Williamson changed the Viking momentum with a hard-hit single that brought three runs across the plate.

“With the bases loaded, Coach told me to do whatever I could to bring some of those guys home. So I stayed calm and swung hard at a good pitch,” Williamson said.

A throwing error by Oak Grove accounted for two of the runs, and the energy in the Viking dugout went up like a rocket.

The next time the Vikings found a change agent was in the sixth inning. This time it fell to freshman Gage Cupstid.  He hit a double over the left fielder’s head. The bases were loaded when Cupstid hit the double, scoring three runs and gave the Vikings a 6-5 lead.

“I bat flipped after the hit, which you aren’t supposed to do, but I really thought it would be a homerun,” Cupstid said.

Oak Grove picked up one run in the top of the seventh which tied the game at 6.  Heading into extra innings, following Brett Wallsworth’s complete 3 pitched innings, Gage Cupstid switched from catcher to pitcher after seven innings.

Cupstid then pitched the last three full innings, with some nail-biting moments that came close to giving Vidalia the win. Smiling, Cupstid said at the end of the game, “I can’t feel my arm!”

Senior Brett Wallsworth told his teammates afterwards in the huddle that they have nothing to hang their head about, and said, “If we play like that then we can go far.”

Emotions on both teams ran high, particularly around the head umpire’s calls of balls and strikes. Oak Grove’s head coach was thrown out of the game in the bottom of the fifth inning for arguing, and Vidalia’s head coach Nic Kennedy also had some direct words with the umpire.

Despite the loss, Kennedy said the game should give his team confidence after a rough start to the season. The Vikings will play at St. Frederick on March 16 before playing their first district game at Delhi Charter on March 23.

“I’m proud of my guys, I can’t complain about any of their playing or toughness tonight,” Kennedy said. “ Coming into this game 0-4 was a low point and they were starting to doubt.  But tonight proved that they can compete with one of the best teams in our division.  That gave them a lot more confidence in themselves, and momentum to have a new outlook on the season.”