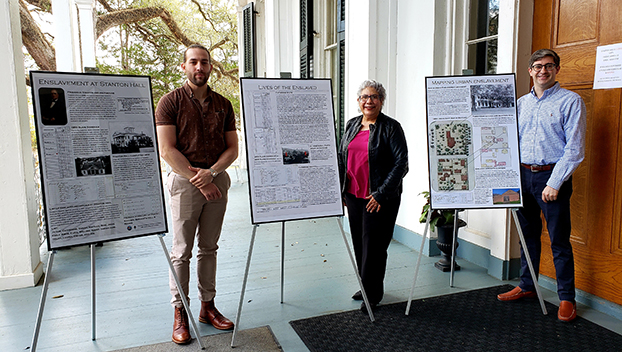 From left, Director of Preservation for the Historic Natchez Foundation Chase Klugh, Ward 1 Alderwoman Valencia Hall, and Historic Natchez Executive Director Carter Burns stand next to panels that tell the history of some enslaved persons at Stanton Hall. The temporary posters and easels will soon be replaced with wooden fixtures for a permanent exhibit on the property. (Sabrina Robertson / The Natchez Democrat)

NATCHEZ — Spring Pilgrimage 2021 has something new on display at some houses — history exhibits focusing on true accounts of individuals who were enslaved there.

Spring Pilgrimage starts this Saturday and lasts through April 13.

Exhibits for Auburn, Rosalie and House on Ellicott’s Hill are being worked on this summer so that all of the houses that are open for year-round tours will have exhibits that focus on African American history, Burns said

The new exhibits were made possible by a COVID-19 relief grant from Visit Natchez, which helps tourism businesses create safe functions during the pandemic.

“This is a wonderful beginning,” said Eugenie Cates, vice president of Natchez Pilgrimage Tours, of the new exhibits.

Research for each exhibit has taken several months, said Preservation Director Chase Klugh of the Historic Natchez Foundation. When telling the story of the white plantation owners, journals and records give an extensive background of the person’s lifestyle.

However, with slave history, finding more out about the people themselves is like putting together pieces of a puzzle, Klugh said.

The Historic Natchez Foundation had to look into estate records — which listed the slaves’ names with all of the estate holder’s property, including furniture — to find out where an individual slave was at which point in time to piece together a narrative.

Burns said the Natchez had urban, suburban and plantation slaves — some who worked in fields and others who worked very close to white plantation owners.

In the case of Stanton Hall, house servants had living quarters attached to the kitchen in what is today the gift shop area on the east side of the house.

Some seemingly had close relationships with the people who owned them.

The Historic Natchez Foundation found an account of an urban slave named Catherine White who lived at Stanton Hall — which was built during the 1850s for Frederick Stanton.

From the account of White in the letter, Klugh said they were able to piece together more information about her from other records.

In one account, White’s work description was listed as “companion,” which Burns said was taken to mean that she assisted Hulda Stanton in her old age.

Hall said it is important that the “history of all people of Natchez” be told, including people of different backgrounds and ethnicities.

“For years now, Carter, Chase and the Historic Natchez Foundation has investigated and researched the personal lives and the human side of (the enslaved people). They actually were humans and many of them were loved by their owners and by their families. It’s not often we hear that side of the story,” Hall said.

Tickets to tour Stanton Hall and other historic houses during spring pilgrimage can be purchased online at natchezpilgrimage.com.