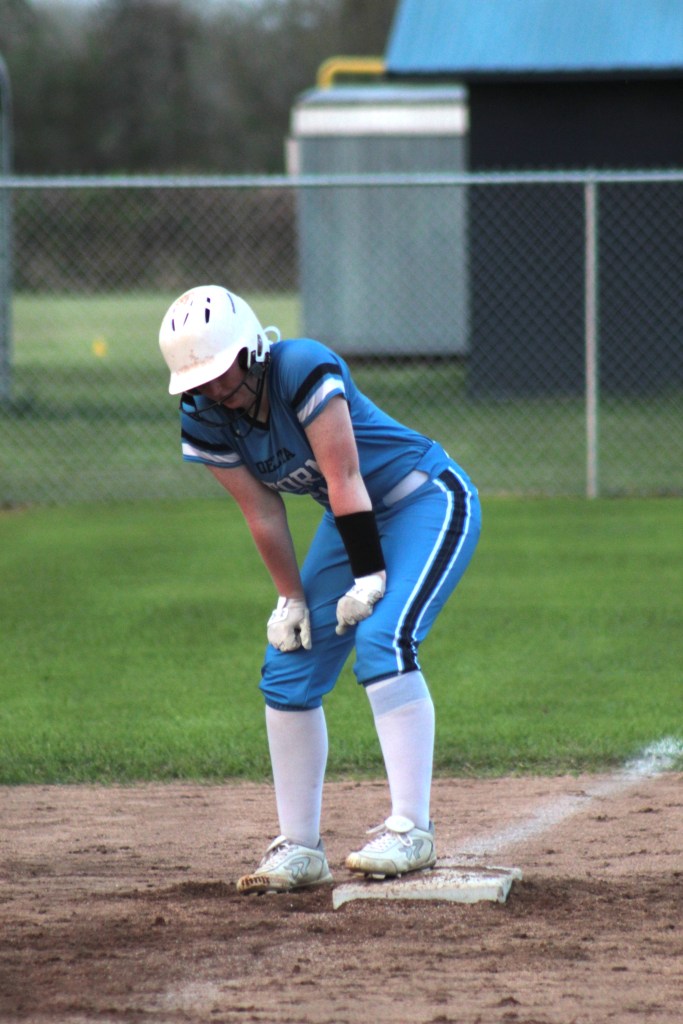 Jaden Boydstun tries to catch her breath on third base. Boydstun played shortstop and pitched the last few innings for Delta Charter. Her base running gave the Storm a chance in the game but Mangham held on to win 11-10. (Hunter Cloud The Natchez Democrat)

Delta Charter mounted a seventh inning rally and had Lily McCarthy between third and home when she got caught in a rundown. The rally was cut short as Delta Charter lost 11-10 to Mangham.

Storm head coach Jeannie Beach said she told McCarthy to go, but then she realized the ball got in quicker then she thought and called for her to come back to third base. McCarthy hesitated and was tagged out, but allowed the batter to advance to second with two outs.

“We were right where we wanted to be,” Beach said. “I got a little aggressive with run number four. They made a good play, and we still had a chance when Tierra came up to bat.”

Tiara Jefferson stepped up to the plate and hit a grounder up the middle to the short stop who threw her out at first ending the game, and snapping a four run rally. Delta Charter was down 11-6 after Mangham had an explosive inning where they plated five runs. Four of the five were on a grand slam.

Beach said they should have never been in the position to have to come back and win the ball game. She said their pitching was good enough to win, and their defense played one of the cleanest games of the season.

“I’m ready to start beating teams that I feel like we are equal to,” Beach said. “I felt like they (Mangham) were just as good as us. That would have been a great win but we waited a bit too late to get the sticks going.”

Delta Charter started the game capitalizing off of some base hits and moved runners around the diamond. They also had an inside the ballpark homerun as Shively Blaney drilled a ball over the left fielders head and raced home beating the throw to the plate.

She yelled “lets go”, as she jumped off the ground from her slide and ran to celebrate with the Storm’s dugout. Beach said she scored because of her aggressive base running. The bats did not get going again until the final inning of play.

The Storm have played three district games and lost two of them. Beach said they would need to play better on defense in order to win their district games against Oak Grove, Cedar Creek and St. Frederick.

“Defensively we still have a lot of work to do,” Beach said. “Offensively we are scoring runs, but our defense gets us in a bind where we have to score more than normal.”

Delta Charter had an impressive defensive stop as shortstop Sophie Cooper made a leaping, over the shoulder catch deep in the hole to rob a Mangham batter of a base hit.

“I think she surprised herself that she caught it,” Beach said. “She has a lot of energy and a great attitude. She is a great athlete.”