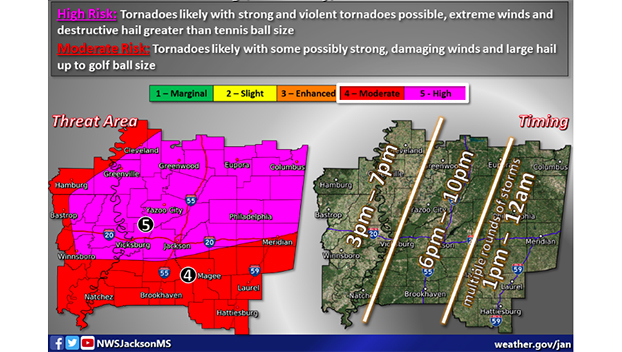 She said the forecast calls for golf ball-sized hail, straight-line winds of up to 60 miles per hour and a possibility of tornadoes, the worst coming for Natchez and Adams County from 3 to 7 p.m. she said.

“We would like to remind people that just because it is between 3 p.m. and 7 p.m., you can still have (isolated storms) happen outside of that time,” Jackson said. “There is definitely a pretty good chance for a tornado. I’m not saying we are going to have one, but we do have conditions right now that are conducive for a tornado environment.”

Forecasts showed a threat for severe weather yesterday, but this morning all the data confirmed the threat, she said. Golf ball-sized has the potential to cause damage to cars, windows, and could harm people, she said.

Law enforcement in Adams County will not be out on patrol if a tornado warning is issued, Emergency Management Agency community liaison Neifa Hardy said. In addition, ambulances will not be responding if there are sustained wind speeds of 58 miles per hour, she said.

The Adams County safe room will be open to the public if a tornado watch is issued. She said the EMA asks individuals to be aware of the weather, and to take precautions.

Individuals are encouraged to take shelter in their homes in an interior room in a tornado watch, she said. Residents should charge their phone in case of an electrical outage, and weather updates can be found on the radio or TV, she said.

Adams County EMA is not asking businesses to close, but businesses are asked to be aware of the weather, she said.

“We want people to be able to make that determination,” Hardy said. “We are not making that call as city or county officials.”