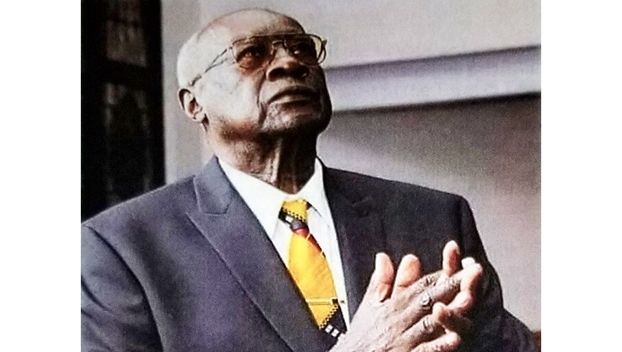 FAYETTE — Graveside services for Will T. Turner Sr., 91, of Fayette, who died Saturday, March 13, 2021, at his residence, will be held Friday, March 19, 2021 at 2 p.m. at Pine Grove Baptist Church Cemetery in Stampley, MS with Minister Boris Irving and Minister Kendrick “Rick” McDonald” officiating.  Services will be under the direction of Spencer Funeral Home.  Facemasks or face coverings are required.

“The steps of a good man are ordered by the Lord: and he delighteth in his way.” Psalm 37:23

Today, we celebrate the life of a Christian man, who was the greatest father, grandfather, great-grandfather, brother, uncle, cousin, remarkable Civil Rights worker, and an extraordinary public servant – one who gave relentlessly to his fellow man.

Brother Will T. Turner, Sr. was born in Jefferson County, Mississippi on February 23, 1930 to Rena and Warren Turner, Sr. At the age of 7, his mother died shortly after giving childbirth and his Uncle and Aunt, Howard and Mary Lou Nichols, reared him along with his siblings.

Brother Turner served his Christian duty at Hollywood and Pine Grove Baptist Church.  He served as deacon and worked faithfully in Sunday School.

He attended Jefferson County Training School.  Being independent and desiring a better life, at the age of 16 he began working with Sidney Brown, a white contractor.  He remained in his employment for 20 years.  During this period, he became adept in the construction field and well known in this arena.  He was approached to do private jobs, independent of Sidney Brown, which led to the beginning of Turner Construction.

Well known throughout the community for his generosity and kindness, he became instrumental in the Civil Rights Movement in Fayette and surrounding areas.  IN 1963, he moved Charles Evers, brother of slain civil rights advocate Medgar Evers, to Fayette.  He attended weekly NAACP mass meetings, participated in numerous civil rights marches, and was often jailed for equality and justice for all.

After working to register people to vote and encouraging others to participate in the work of the movement in several different places, he participated in the slate of blacks seeking to make changes with the elected officials in the Town of Fayette and they were all elected.

In 1964, Bro. Turner was elected as one of the first Black Alderman to serve in a bi-racial town in the State of Mississippi along with four other blacks and Charles Evers as Mayor.  When elected to the Board of Aldermen of Fayette, he was interviewed by JET magazine and they were all published in the July 24, 1969 edition.  He served three terms as an Alderman of the City of Fayette.  He also served as Coroner of Jefferson County for 24 years.

Bro. Turner married the love of his life, Florence ‘Cute’ Clark, on July 16, 1949.  This union lasted for a span of 71 years.  Oh, how it blossomed with the addition of seven wonderful children whom they adored and nurtured in the admonition of the Lord; name – Will T. Jr., Perry, Delories, Mary, Patricia, Tina and Janice.  They also reared/adopted grandchildren, Jarmila, Justin, and Shamarra.  Love was equally shared among all of their children, grandchildren, great-grands, and great-great grands.

Today, we celebrate our Dad, our Hero.  “You labored 91 years, and God has called you to take your rest and united with your queen.”