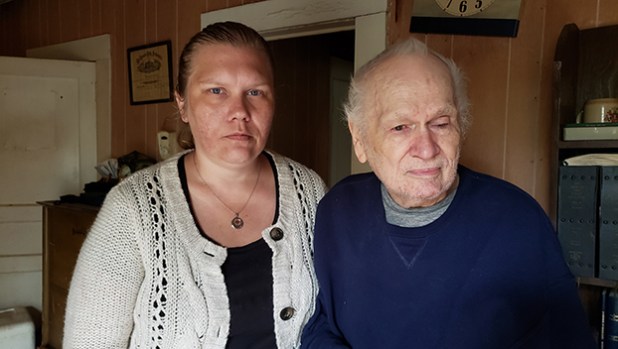 From left, Stephanie MIller and Bobby Kepper returned to their house on Cherry Street Friday to assess the damage from a Thursday night fire. The house and many of their belongings were destroyed. (Sabrina Robertson / The Natchez Democrat) 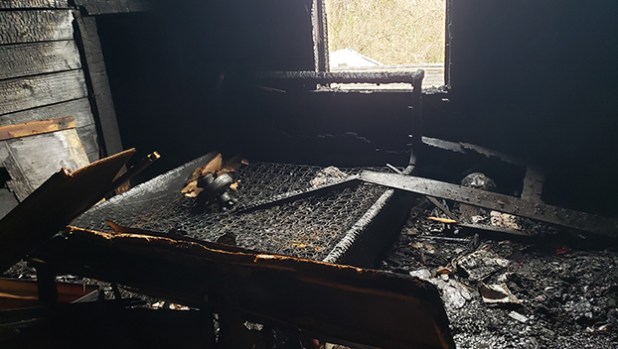 Stephanie Miller’s bedroom and the entire upstairs of her house were charred black in a fire Thursday night on Cherry Street. (Sabrina Roberston / The Natchez Democrat) 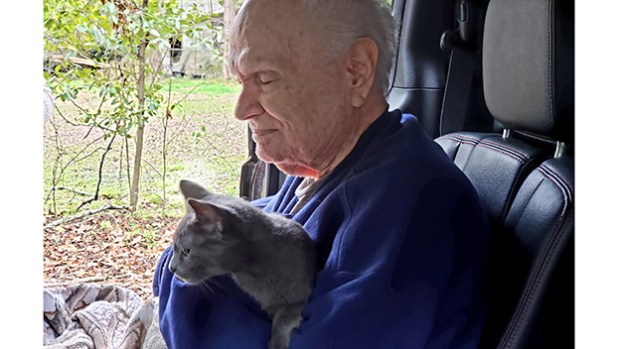 Bobby Kepper holds his cat, Kitty, who was found unscathed in his house on Cherry Street after it burned in a fire Thursday night. (Sabrina Robertson / The Natchez Democrat) 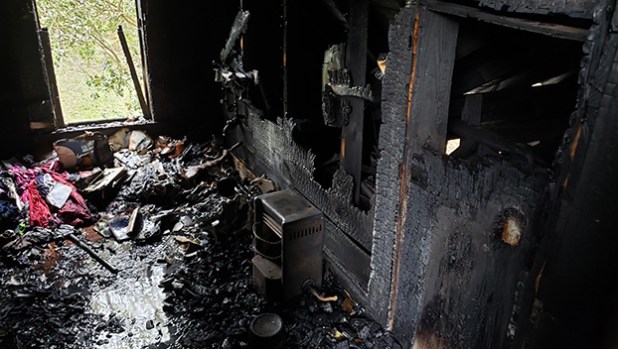 The entire upstairs of Bobby Kepper’s house on Cherry Street was burned in a fire Thursday night. (Sabrina Roberston / The Natchez Democrat) 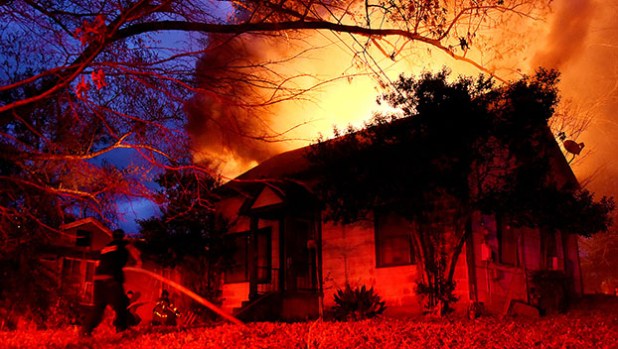 Natchez firefighters work to put out a house fire on Cherry Street Thursday night. Flames could be seen pouring out of the upstairs when firefighters arrived at the scene shortly before 8 p.m. (Ben Hillyer / The Natchez Democrat)

NATCHEZ — A Thursday night house fire on Cherry Street near Duncan Park destroyed the home of an elderly blind man and a disabled woman.

Stephanie Miller she and Bobby Kepper were home when the fire started.

Miller said they got out safely thanks to a neighbor who alerted them when flames started pouring out of the window of Miller’s bedroom upstairs, but the house was destroyed.

The two of them are staying with Cochnauer until they can find another place.

Cochnauer has started a Facebook fundraiser on their behalf.

“Stephanie and Bobby lost their home on Cherry Street and everything in it due to a house fire on 3/18,” Cochnauer posted with a link to the fundraiser page. “They did not have homeowners insurance and have no idea what they are going to do now. Bobby is 87 years old and blind. Stephanie is disabled. They live off of Social Security and now they are homeless with nothing but the clothes they had on. Please help them get a new start.”

The fundraiser page for Kepper and Miller can be found by clicking here.

Kepper has lived in the house since he bought it in 1977, he said, adding the house was probably built in the late 1940s.

“(Kepper) is like a grandfather to (Miller), but they’re not blood-related,” Cochnauer said as the family searched through the damage to find anything that could be saved on Friday morning. “They take care of each other.”

Miller said she and Kepper were sitting downstairs listening to the news at approximately 7:30 when their neighbors came to the door to tell them they needed to get out of the house.

In the time it took for her to answer the door and look for their cat, which she simply calls “Kitty,” the house was filling up with smoke.

“I knew we had to get out right then,” she said.

When they returned to the house Friday morning, Kitty sat unscathed on top of the refrigerator while water poured into the living room from a bathroom upstairs.

Downstairs there was mostly water and smoke damage and ceiling tiles covered the floor and furniture. The staircase and the two rooms upstairs were completely charred black.

Miller and Cochnauer salvaged a few knickknacks and china that belonged to their father before he died in 2005, but it was very little compared to what they lost, Cochnauer said.

“At least we were able to salvage something,” Cochnauer said with tears in her eyes.

Kepper said he was still in shock from the incident.

“I believe we’re going to have to start over,” Kepper said as he felt the damp ceiling tile sitting on a desk in the lower level of the house. “It’s worse than I thought.”

It’s apparent that the fire started upstairs, however, the cause of the fire is still under investigation, Natchez Fire Chief Robert Arrington said.