Top of the Morning: State has option to be innovative with funds 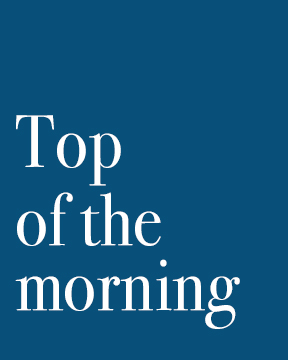 Gov. Tate Reeves and other Republicans have argued that states do not need the $195 billion in federal funds from the American Rescue Plan to offset revenue losses caused by the coronavirus-induced economic slowdown.

Mississippi is slated to receive $1.8 billion from the pot of money — a sizable amount considering the annual general fund state budget is about $6 billion.

Reeves is right in the sense that many states, including Mississippi, have not yet suffered as dramatic revenue losses from the COVID-19 economic slowdown that they experienced during the recession caused by the financial meltdown in 2008-10.

Because of these strong revenue collections, Mississippi’s policymakers do not have to use the American Rescue Plan funds just to make up for revenue lost because of the coronavirus economic slowdown as some states will have to do.

They have a chance to be innovative in spending the funds for the betterment of the state.

There are restraints on how the funds can be spent that will need to be explored. But policymakers can take their time to study their options because they have multiple years to spend the funds. The funds can be spent, for instance, “to make investments in water, sewer and broadband infrastructure,” according to the National Conference of State Legislatures.

There are, of course, countless local governments throughout the state, with the city of Jackson at the head of the list, with water and sewer infrastructure needs they cannot afford to fix on their own.

“We have the opportunity to stretch out and take bold action in spending the funds to help Mississippians,” said Rep. Robert Johnson, D-Natchez, the House minority leader.

The situation is much different for Mississippi than in 2009 when Congress passed the American Recovery and Reinvestment Act. Mississippi received about $1 billion from that federal legislation to help make up for state revenue lost from the so-called Great Recession.

Mississippi needed every dime of those federal funds and more to prevent state budget cuts, including the layoff of state workers. The decline in state tax collections during that time was unprecedented. In fiscal years 2009 and 2010, the state for the first time in modern history experienced consecutive years where less revenue was collected than the previous year.

Mississippi used the ARRA fund to partially offset the reduction in tax collections during a period of three fiscal years.

This time around, Reeves says that the Mississippi economy has fared better than the economies of many other states because businesses were not shut down because of COVID-19 to the extent they were in other states.

Many economists also point to the impact of past federal COVID-19 relief packages as being particularly helpful to Mississippi. The $600 per week in unemployment benefits provided in the past federal legislation combined with the $235 available in state unemployment relief resulted in many Mississippians earning more while not working than they were making at the job they lost because of COVID-19. In other words, the extra $600 in unemployment benefits went further in Mississippi than nearly every other state in the nation because Mississippi has more low-paying jobs than most states.

In addition, past COVID-19 stimulus payments of $1,200 and then $600 for individuals went a long way in Mississippi.

The payments of $1,400 — another round of enhanced unemployment benefits and tax credits for children in the American Rescue Plan recently signed into law by President Joe Biden — should help keep the Mississippi economy going strong.

In addition to the $1.8 billion in aid to the state, another $1.3 billion will go to Mississippi’s cities and counties.

Meridian receives $8.2 million, DeSoto County gets $35.8 million and Greenwood gets $3.1 million to name a few others.

How policymakers on both the state and local levels opt to spend those funds could have long-term consequences for Mississippians.

State Treasurer: The national debt is a growing threat