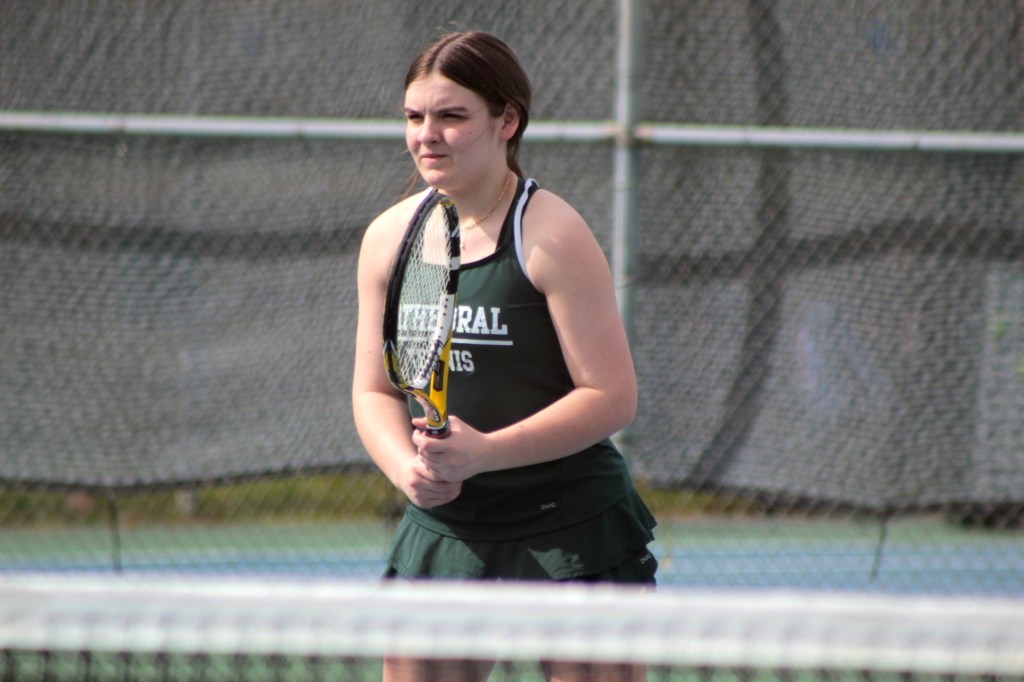 Meredith Lessley awaits a serve in her doubles match against Parklane on Monday afternoon. Cathedral lost 5-4, but Meredith and her partner Lacy Welch won their match 2-6, 6-1 and 1-0. (Hunter Cloud The Natchez Democrat)

Joseph Garrity smacked his racket on the tennis court in frustration, and twins Hartley and Harris Pyron said their doubles match was the worse the ever played as Cathedral lost to Parklane Academy 5-4 on Monday.

It was boys doubles that turned out to be the deciding point in Cathedral’s defeat, as they did not play as good as they could have, head coach Beth Foster said.

Garrity and his partner Grayson Guedon lost 3-6 and 4-6 in their doubles match. Harris, and Hartley lost their match 3-6 and 1-6. Garrity ran into the fence twice in his match and got his foot stuck one of those times, she said.

“They had a very rough day,” Foster said. “They were pity patting the ball. They were not using good strokes. I know when they get to playing, they get nervous and they just want to get it in. They beat themselves. They need to use their strokes.”

Monday’s action was the first return from spring break for the Green Wave as they had just two voluntary practices over the break. Foster said it seemed like most of the team was still on spring break in their matches.

The first Green Wave player off the court was Alex Monagan who won his singles match 6-1 and 6-0. Brady Gamberi fought to keep his sets close but fell 2-6 and 3-6. She said Gamberi is new to sport after picking up a racket during COVID, and while the score may not have shown it, he was close throughout his sets.

Annalyce Riley and Natalie Smith struggled in their girl’s singles matches. Annalyce lost her match 1-6 and 0-6 and Natalie lost her match 2-6 and 2-6. The fight of Caroline Guedon and Huddy Lees prevailed as they won their doubles match for Cathedral.

After losing the first set 1-6, Caroline and Huddy won their second set 7-6 before winning a tiebreaker 10-7 to win their match. Lacy Welch and Meredith Lessley went to a tiebreaker in their third set after dropping the first 2-6 and winning the second 6-1.

“They wouldn’t give up,” Foster said. “They don’t like to lose. They wanted that.”

Cate Drane and Aiden Whitaker won their mixed doubles match 6-3 and 6-2 to give Cathedral their fourth point. Foster said she was proud they won four courts against Parklane because they are in the same division as Jackson Academy, Jackson Prep and Madison-Ridgeland Academy.

Cathedral will play a district match with Brookhaven Academy at 3:30 on Thursday if it does not rain. In order for the Green Wave to win that game they will have to have the want to win, she said.

“Growing up when I played tennis, if I started out bad I knew my second set I had to kick it in gear,” Foster said. “You just have to fight it off. You have to get your head in the game, be aggressive and move. They were so flat footed today. You have to want it even if you are having a bad day.”