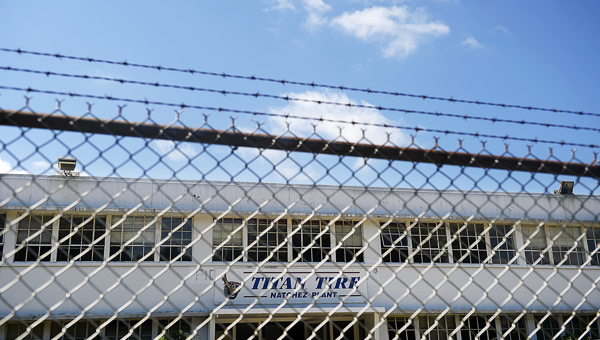 City officials are negotiating a lease for the old Titan Tire plant. The facility has been out of use since 2001. (Natchez Democrat File Photo)

NATCHEZ — City of Natchez officials are negotiating a lease agreement with a possible tenant for the former Titan Tire plant.

The Board of Aldermen discussed leasing the facility in executive session during their Tuesday regularly scheduled meeting.

According to the Open Meetings Act, discussion of the prospective lease or sale of city-owned property qualifies for executive session, which is not open to the public.

After they returned to the public meeting, the Board of Aldermen voted unanimously to allow Natchez City Attorney Bryan Callaway to proceed with negotiating a lease with an unnamed entity provided that entity would agree to a monthly rent of $5,000 for the plant.

Aldermen Dan Dillard said the money from the lease would be earmarked for making repairs to the roads in that area.

At the beginning of Natchez Mayor Dan Gibson’s administration, Gibson discussed possibly using the facility for a workforce development program.

However, officials abandoned that idea in December leave the facility open to an economic development prospect.

The proposed location for the workforce development program shifted to buildings owned by the Natchez Adams School District and Copiah Lincoln Community College.

Gibson was absent during Tuesday’s meeting for an economic development trip on the American Queen Steamboat Company’s newest riverboat called “The American Countess.”