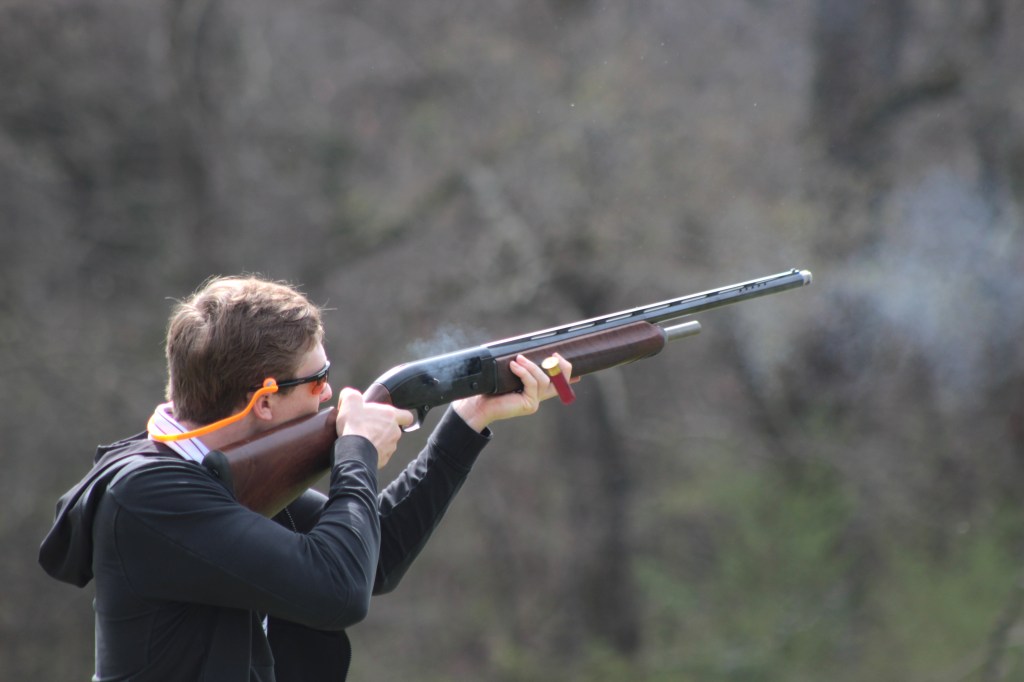 Sam Mosby fires on a clay pigeon during trap shooting practice on March 13. Mosby and the Green Wave will compete in the state shooting finals on April 30 to May 1. (Hunter Cloud The Natchez Democrat)

Standing on a concrete slab, Sam Mosby yells pull into a microphone with his shotgun pointing over the trap house.

An orange clay pigeon flies into a blue sky in front of a backdrop of trees before he pulls the trigger. Smoke flows out of the chamber, and the wad from the front of the shell flies out. Simultaneously the clay target shatters into thousands of little pieces.

Cathedral’s shooting team took aim at clay targets flying through the sky for two hours on March 13. This is Cathedral’s first year to have a shooting team as part of the Mississippi Department of Wildlife, Fisheries, and Parks scholastic shooting program, coach Ryan Marchbanks said.

“I have some kids that don’t play other sports. This gives them something they can compete in,” Marchbanks said. “Football, baseball and soccer isn’t for everybody.”

While not every shot hit the target, his best shooters are hitting targets at a rate of 90 percent while his worst hit them at a rate of about 50 percent, he said.

Fifty-four schools from around the state compete in three shooting disciplines, trap shooting, skeet and sporting clays. Shooters face 100 targets in each of the disciplines.

Green Wave shooters learned the procedures for trap shooting and how to practice gun safety when competing. For example, shooters had to have their gun chamber open and unloaded when not firing at a target. The shotguns were also loaded one shell at a time.

“Safety is of the most importance,” Marchbanks said. “There are some pretty stringent regulations that go along with the competition. It is always at the forefront of anyone’s mind. These kids do a good job with it, and they know how important it is.”

Discarded shells were picked up and placed into a bucket to later be reloaded. Ammunition has been hard to find this season, but Bowies Outfitters and SportsCenter have been good about ordering some for the team, he said.

Winners of the tournament will receive $10,000 in college scholarship. Marchbanks said they can also win coolers and gun cases. Back-to-back champions East Rankin has a target on its back, as Cathedral is aiming to win the State Tournament at the Turcotte shooting facility on April 30 and the Capital Gun Club on May 1.

“We are going to have to shoot lights out to compete with them,” Marchbanks said. “I can guarantee you they know we are coming. We are on their radar.”

Marchbanks said he is thankful for Natchez Shooting Sports and Clay Hollow in Magnolia for letting the team practice at their facilities.