‘No blueprint’ for COVID-19 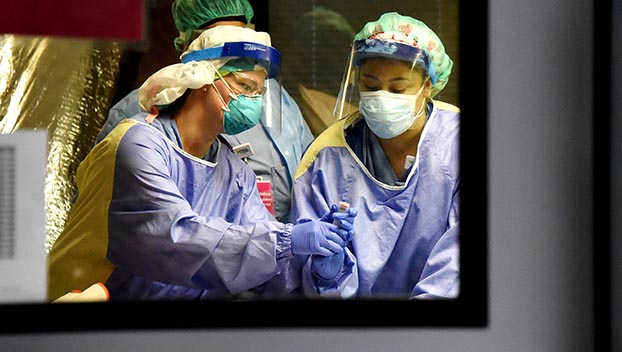 Treating surgical patients and treating critically ill patients are very much the same, he said.

“When you complete five years of the chaos of general surgery training, you have been taking care of critical care patients every day,” Martin said. “With trauma, you don’t know what’s coming in the door every day. Working in surgery is very similar to working with patients in the ICU.”

Martin, a native of Natchez, began his general surgery practice at Merit Health in 2015.

“When things first started looking bad last spring, we knew we were going to be overwhelmed. When that kind of thing happens, we could send patients to lots of tertiary care centers in bigger towns. We weren’t going to be able to do that with COVID patients,” he said.

Dr. Geoffrey Flattmann, Natchez surgeon and chief of staff at Merit Health Natchez, along with Martin and other Natchez physicians, began work making a plan for how the hospital would handle the influx of critically ill COVID patients they were expecting.

“Things kind of spiraled from there,” Martin said. “I was basically in the ICU managing patient care. We were not doing many elective surgeries, only doing emergency procedures, so I had the time to do that.

“There is a lot we didn’t know at the time about the disease process of this virus, but the basics of taking care of critical patients don’t really change. We just had a lot more to care for at once.”

The care of COVID patients that took place and continues to be used at Merit Health Natchez was based on the same protocols being used at large, university hospitals.

“Patients in smaller hospitals are always concerned about whether they are getting the same quality of care found at bigger facilities. We were doing everything the bigger hospitals were doing, but on a smaller scale.

“I was in constant contact with people I had worked with during my surgical residency at University Medical Center in New Orleans. I was learning from them what was working in terms of medications and other protocols. In terms of the care we were providing here at Merit Health Natchez, we were ahead of some of the rest of the state. We were doing things here some of the other, larger places in the state weren’t doing, and those things helped patients here in Natchez,” Martin said. “Dr. Flattmann had us using convalescent plasma. From the first month, he was in touch with the Mayo Clinic and we were being aggressive in how we treated COVID patients. I think we can look with pride at what we were doing.”

Flattmann, who took on the role of chief of staff at Merit Health Natchez in January 2020, soon realized COVID would become an issue here, though at the time no one knew just how much of a problem it would present.

“I knew it was on our doorsteps and we needed to take measures to be prepared, even though we hoped we wouldn’t be effected,” Flattmann said. “The problem was, we had no blueprint. There was no playbook to follow. And we got hit early on —right after New Orleans saw it. We were left to piece things together. For instance, in managing COVID patient airways, which put others at risk, I read a paper out of Singapore on converting an operating room into a COVID safe room and doing all intubations there. So we did that,” he said. “The closest thing we had to critical care physicians here were the two surgeons — Martin and Flattmann. We were not a big enough staff that would allow us to absorb the loss of a bunch of providers. We could absorb losing one, but not 10, so for almost a year, in order to minimize exposure to the virus, I intubated every patient that needed it and Chris managed the care of the patients in the ICU.”

Flattmann lauded the staff at the hospital for the work it has done and the sacrifices each has made during the last year or treating COVID patients.

“From my perspective, the incredible dedication and sacrifice of the staff — from nurses in the ER and ICU and respiratory and lab techs and everyone who put themselves at risk — was incredible. They put themselves at risk and no one in this hospital stepped away. We had a lot of physicians who stepped away, who didn’t show up. But the rest of the hospital staff handled the heavy lifting. As disappointed as I was in some members of my medical staff, I was so impressed with the work of the hospital staff. Many don’t understand how hard those times were for us. It was a very, very trying time,” Flattmann said.

Get vaccinated and get healthy

Flattmann encouraged Natchez and Adams County residents to get vaccinated.

“I believe it’s effective and safe and the only way our society will return to normal,” he said.

Martin said he thinks residents should focus on prevention and ridding themselves of diseases that can be controlled through healthier lifestyles.

While some younger, healthier patients with COVID did not survive, particularly during the early days of the virus, Martin said most of the deaths occurred with those patients who had co-morbidities, meaning they were already suffering from underlying conditions, such as diabetes, hypertension or morbid obesity.

“Everything is being done to figure out what fixes this virus, this disease, but ultimately, there will be another one down the road,” he said. “We need to a better job of fixing things on the front end. We in Mississippi lead the nation in diabetes and obesity. We need to get to work on solving those problems so we will be in a better position when exposed to the next virus that comes our way.”