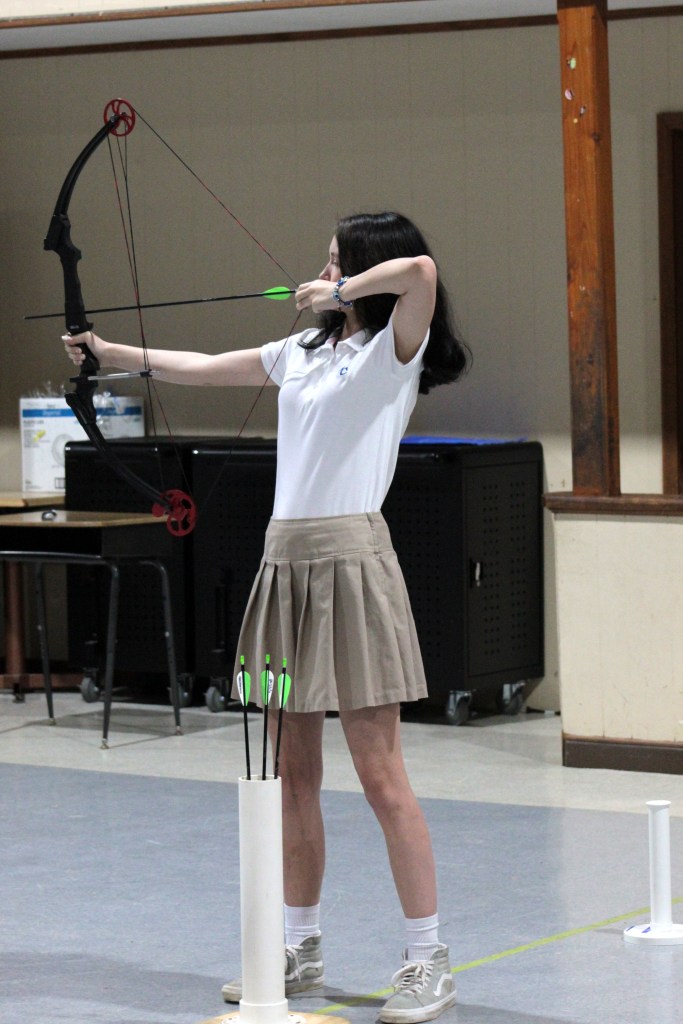 Janie Seyfarth is an eight grader at ACCS and she is a member of the archery team. Seyfarth shoots left handed. (Hunter Cloud The Natchez Democrat)

A whistle blows piercing the air and a second later the thud of arrows hitting their target can be heard in the ACCS multipurpose building during the Rebel’s archery practice.

Through the Mississippi department of Wildlife, Fisheries, and Parks, ACCS is able to have an archery team and compete against other high schools in the state. Coach Cricket Dougherty said she has coached the program for the last five to six years.

She said the program started at Trinity Episcopal Day School and when it closed, she brought it to ACCS. When she first came to ACCS, she had a team made up of students from grades 4 to 12. This year due to COVID she had to limit the teams to a junior high and high school team, she said. The bows they use are compound bows with a low draw weight.

“I’m able to shoot my junior high team (with) my high school team. (This) makes them shoot twice so their scores will count twice,” Dougherty said. “We have been able to take our 13 (archers) and transform it into 33.”

Thursday afternoon the Rebels competed in the South State competition held virtually at remote locations this year. In previous years, the competition would have been at the Mississippi Coliseum in Jackson with thousands of other students from across the state, she said.

“Everyone is having their own little south states all over the south (of Mississippi) right now,” Dougherty said. “We will go automatically, but whether or not you will be able to place, that is determined by the score you have.”

In practice Tuesday, the Rebels had an archer shoot a perfect 50, she said. Students shoot from 10 to 15 meters, and they have four arrows to shoot with the first being a practice arrow. In practice, the students were shooting five arrows at a time, so the kid who scored a 50 had five arrows in the middle of the target, which is worth 10 points.

ACCS had to have two coaches be certified by the MDWFP to teach Hunter Education in order to have an archery program, she said. Travis Smith is the other archery coach at ACCS, she said.

In the class, students learn the importance of gun safety, and the safety rules for using a firearm or in this case a compound bow.

“It is a very safe sport,” Dougherty said. “We have never had an accident to my knowledge throughout the state in terms of somebody misfiring or harming another child.”

ACCS has a mixed team of boys and girls who compete with each other, she said. The team’s top 12 scores count towards how the team places, but every kid on the team is able to compete, she said.

“I love archery in that anyone can do it,” Dougherty said. “From the smallest girl to the biggest boy, it does not matter. Size does not matter. It is about repetition. It is about practice. It allows kids to join something they wouldn’t have otherwise been involved in sports. In this program anybody can do it, There are no limitations.”