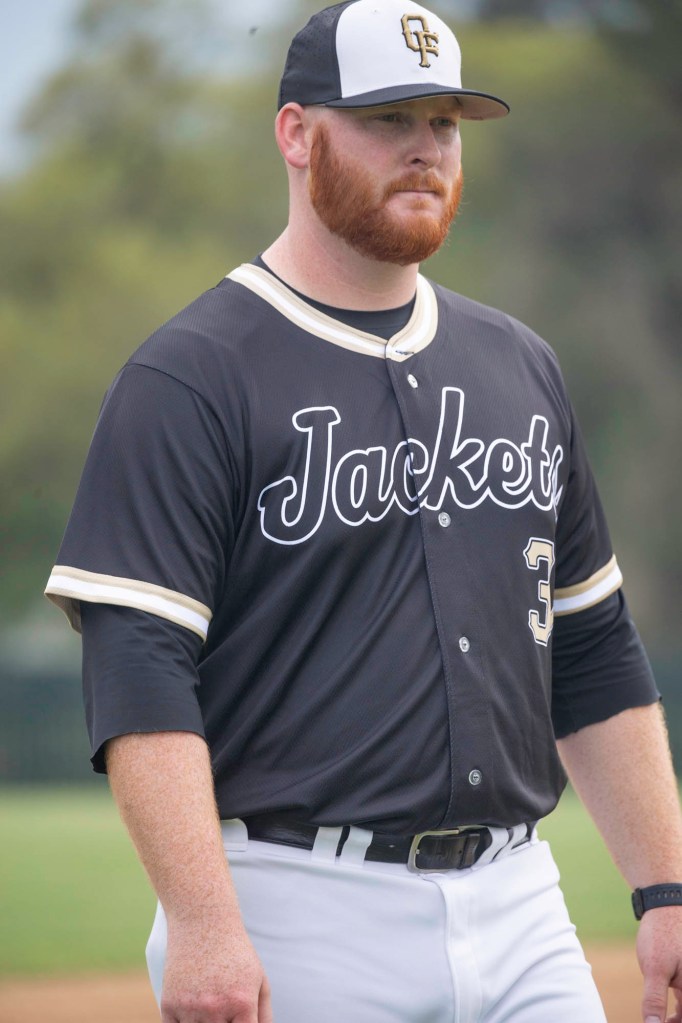 Head Coach Jake Brumfield is in his first year at Oak Forest Academy (Amite, LA). Brumfield is a 2012 graduate of Adams County Christian Academy, a 2014 graduate of Pearl River Community College, and a 2016 graduate of Delta State University. (Bill Barksdale Special to The Natchez Democrat)

Baseball players are superstitious. In the dugout, the bench often repeats a routine that resulted in a hit or run at the last at-bat. Not even a new dugout “rally monster”, a cookie monster with chains, could help Cathedral against Oak Forest of Amite, Louisiana, last Friday.

Sophomore Noah Russ struggled on the mound throwing 15 strikes out of 32 pitches in 1.1 innings yielding 6 earned runs. Senior Hollis Lees said they could not find a way out of the inning.

“We were leading the game through the fifth, but then came a bad throw after bad throw, error after error,” Lees said. “We weren’t focused and have to approach the next game completely locked in.”

Oak Forest head coach Jake Brumfield is in his first year as head coach of Oak Forest Academy and is a graduate of Adams County Christian. He attended Pearl River Community College and Delta State University.

His pitching strategy was crucial in the Yellow Jacket’s win. For example, Oak Forest sophomore Eli Woodard pitched a complete game throwing a total of 75 pitches, 73% of which were strikes.

“I was proud of him, he was pounding the zone, controlled the ball well and had multiple pitches that were working for him.” Brumfield said. “I tell all of my pitchers that I want the batter out of the box in four pitches no matter the outcome.”

In the second game, the Green Wave battled from behind, but Cathedral’s five runs in the 7th inning were not enough to overcome the Yellow Jackets. Sophomore Tanner Wimberly was the team’s standout with three RBIs.