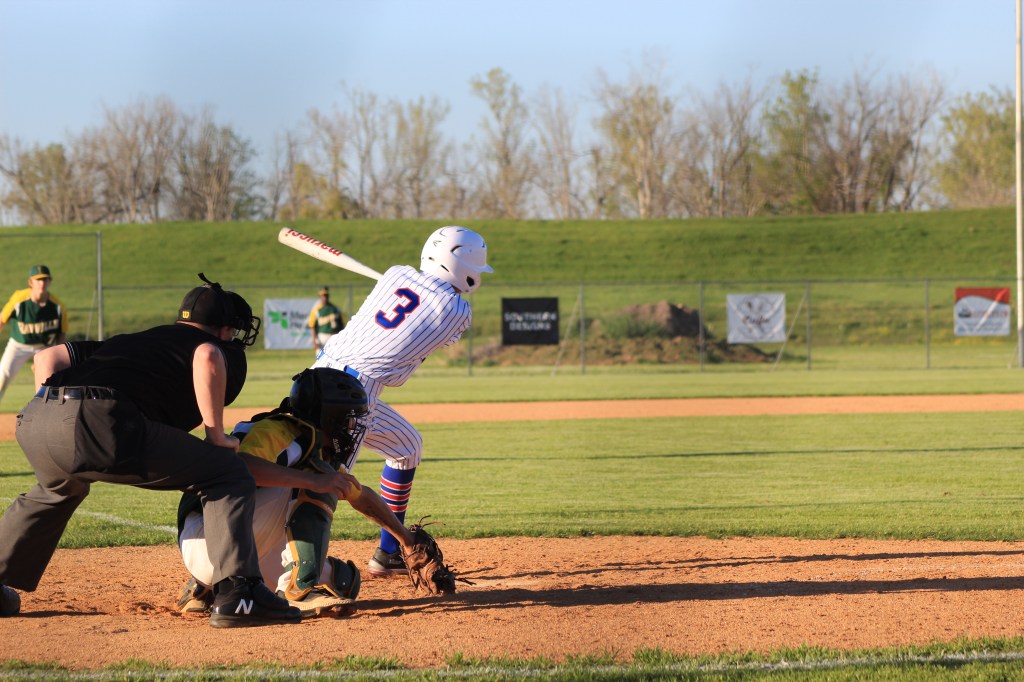 Lane Dean hits a walkoff single up the middle of the field. It was the first high school walkoff for the freshman as Vidalia won 9-8 over Rayville in extra innings Monday afternoon. (Hunter Cloud The Natchez Democrat)

Vidalia clawed its way to victory Monday afternoon as a hit batsman and a dropped pickoff throw moved Braden Goldman into scoring position bringing Lane Dean up to bat in the eighth inning against Rayville.

Just a freshman Dean approached the plate with one thing on his mind, “to put the ball in play”. Using a two-stroke approach, he connected with a changeup to the outside. He knocked a grounder past the outstretched glove of the second baseman scoring Goldman to win the game 9-8 for Vidalia Monday afternoon.

“For being a true freshman it is a pretty nice feeling. Starting on a varsity team, not a lot of freshman get that opportunity,” Dean said. “It is a big role that I have to fill.”

If he could recreate a special baseball moment he had as a kid, it would be throwing a no-hitter in the championship game. He has not had a moment like that since, he said. An LSU fan that idolizes Alex Bregman and Warren Morris, he said, the Vikings are a young team just like the Tigers.

Goldman had faith in his teammates when he got to first after being hit by a pitch. When a pickoff throw bounced off of the first baseman’s glove into foul territory, he took off for second base and beat the throw there. He said he just believed the team could win as he sprinted down the base path.

“I got this. When I was on my way to second I was like we got this,” Goldman said. “I had faith in the hitter that was up. I knew he would move me over. (I felt) relief just straight happiness.”

After the game, head coach Nicholas Kennedy told his team they should have never been in extra innings with. He was not wrong. Vidalia jumped out to a strong lead but an inning of poor execution cost them.

“We had a chance to get seven outs, and the game is hard enough to play with three,” Kennedy said. “This happens every game. We just need to find a way to cut that out and figure out how to not have that anymore.”

Kennedy took a page out of the baseball movie Bull Durham explaining the simplicity of baseball “You throw the ball, you catch the ball, and you hit the ball.” he told his team before dismissing them.

After starting the season on a six game losing streak, the Vikings have won five out of their last seven games. The reason being slow starts to games because they get away from baseball 101 Kennedy said. Vidalia is a young baseball team, Dean said.