Bulldogs steal their way to victory 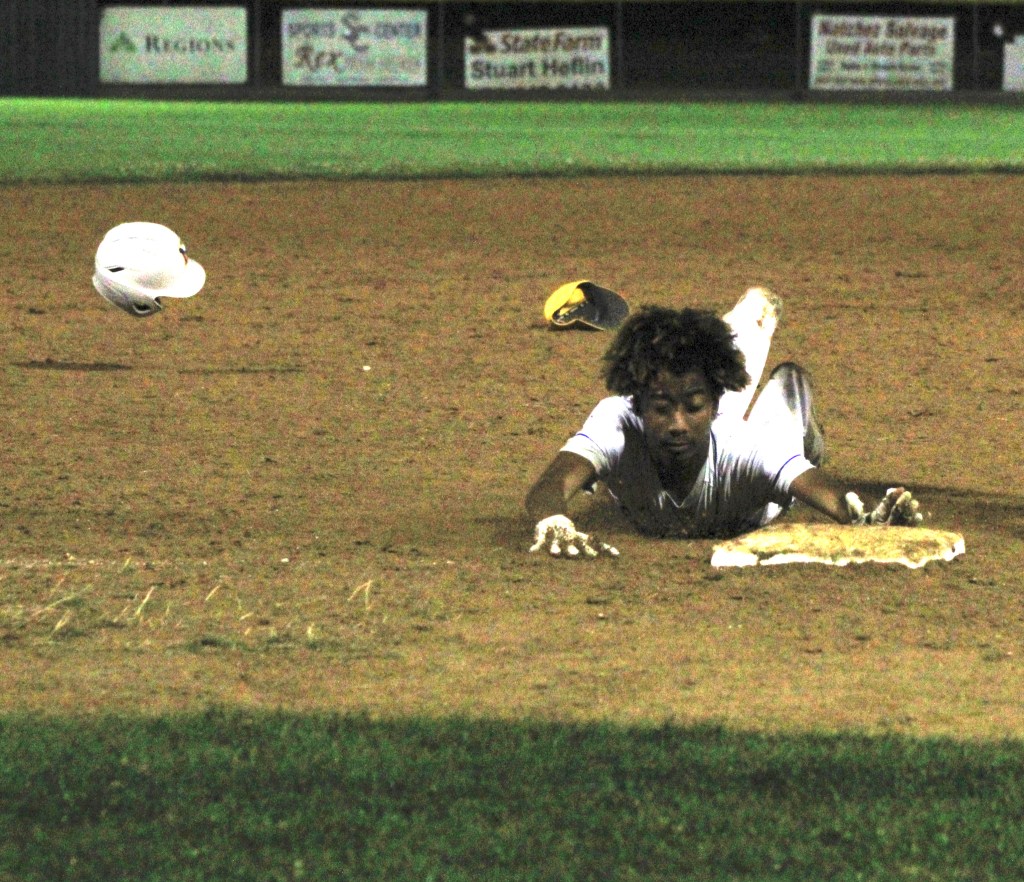 Zehalin Cornett slides into third base for Natchez. The Bulldogs managed to steal 37 bases in a double header with Jim Hill. They won the first game 15-5 and the second game 15-0. (Hunter Cloud The Natchez Democrat)

Natchez High School’s Travon Henry jumped in the air with his bat in his hand as the runner on third base came streaking down the line.

While in the air he knocked the ball down into the dirt in front of the catcher and sprinted for first base. Both the runner on third and Henry were safe in a squeeze bunt called by Head Coach Dan Smith.

“Coach told me to get the squeeze down, and I just did it,” Henry said. “He taught me throughout the years how to bunt. He told me to do a job so I did it. It was kind of hard. I was hurting, and I didn’t even want to hit. When he told me to get it down, I tried to get it, and I did.”

Henry also threw in the game and stole a couple of bases as a runner. He said he could pretty much do anything for the team.

Jim Hill was no match for Natchez High as the Bulldogs won 15-5 in the first game of the double header Tuesday night. In the second game the Bulldogs scored 15 unanswered runs and shutout Jim Hill to win 15-0 by mercy rule in the third inning.

Smith said his team played a complete game, meaning they threw the ball, hit the ball, and fielded the ball at a high level. With the win they are pretty much in the drivers seat to win a district championship with three games left, he said.

Their game against Forest Hill will be a double header at home April 2, and their final game against Jim Hill will be on April 13. Henry said it would be the second time to win district with the Bulldogs since he started playing for them. He said he is excited for the opportunity.

Natchez Assistant Coach Kevin Campbell said in the last six games the team had managed to steal a total of 45 bases. In two games against Jim Hill, Natchez nearly matched that with 17 stolen bases in the first game and 20 stolen bases in the second game.

Taking off down the base path to second base in a dead sprint is how most teams would approach their running. However Natchez found it so easy to steal second base Jim Hill stopped throwing all together, and the Bulldogs often times walked the last few steps to the bag.

Aggressive base running is the hallmark of the Bulldogs baseball team. Smith said it’s just what they do. The batters get on base and then apply offensive pressure with their running.

“I’m glad they got on base to do it,” Smith said. “A lot of the times we look at the pitcher’s release. How long it takes for him to get from the mound to home. ”