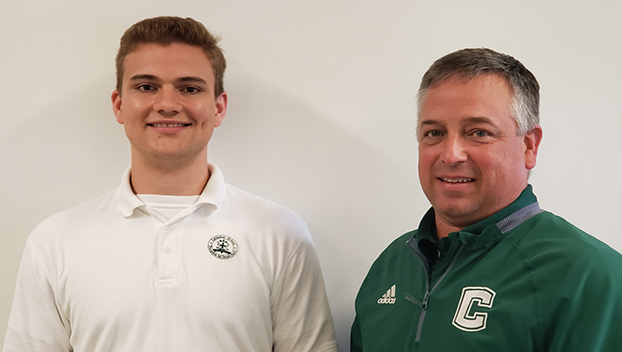 Aiden Whitaker and Coach Craig Beesley have been named the STAR Student and STAR Teacher at Cathedral High School for the 2020-2021 school year. (Sabrina Robertson / The Natchez Democrat)

Whitaker is the son of Dick and Cheryl Whitaker and enjoys football, hunting and tennis. He is also a member of Science Olympiads and National Honor Society and the Youth Council for First Baptist Church in Natchez.

To be named STAR Student, Whitaker said he had a composite score of 33 on his ACT. The highest score possible is 36 and the average score is 21.

Whitaker has been accepted to the United States Military Academy at West Point, where he plans to study mechanical engineering with the goal of joining the army as an officer.

Whitaker said his inspiration to join the army comes from his grandfather and role model, Warren Enterkin, who is a veteran.

The STAR Students designate the STAR Teacher for their school and Whitaker chose his mathematics teacher and football coach, Craig Beesley.

“He is a fantastic teacher,” Whitaker said of Beesley. “Math is especially important to engineering and he teaches it well. I couldn’t ask for anyone better.”

Beesley said he has taught trigonometry, calculus and pre-calculus as well as coached at Cathedral for 27 years in addition to teaching and coaching one year at Natchez High School.

Beesley said Whitaker is a great student-athlete and is also very intuitive in the classroom.

“When he sees a problem, likes to know the why the answer is what it is and not just the answer. He digs deeper than most students,” Beesley said. “It is also a big honor for one of our students to get into West Point. We look for big things from him in the future.”

As Cathedral’s STAR Student, Whitaker will be recognized with a medallion and certificate from the M.B. Swayze Foundation with more than 600 other STAR Students and STAR Teachers in the state.