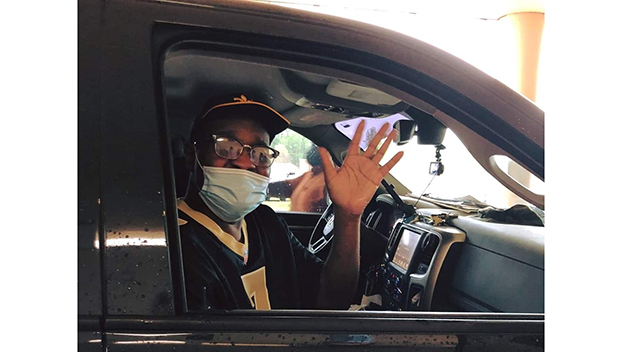 Rev. Eugene Prater, pastor of New Life Apostolic Church and administrator at Glenburney Health Care Center, waves as he is leaving Merit Health Natchez Wednesday after having been hospitalized for 47-days with complications from COVID-19. (Submitted photo)

NATCHEZ — Rev. Eugene Prater, the pastor of New Life Apostolic Church on Fatherland Road and administrator at Glenburney Health Care Center, came home Wednesday after spending a total of 47-days in hospitals in Natchez and Jackson due to complications with COVID-19.

Prater said on multiple occasions, his doctors and nurses told him to thank God he was still alive.

“They didn’t think I was going to make it,” he said. “Millions didn’t make it but it did. That made me want to push and fight. They say it’s a miracle that I’m alive. One doctor said just praise God and thank God. That’s all they would tell me.”

COVID-19 hit Prater’s family hard, almost all at once. Prater was diagnosed with COVID on Feb. 8 and the virus later infected most of his family.

They were taking all of the precautions: hand washing, mask-wearing and social distancing, he said.

His mother, Exelena Arbuthnot, who is 87, was admitted to the hospital with COVID on Feb. 19 the same day his sister, Betty Prater, tested positive.

Peggy Bacon, another of Prater’s sisters, was one of few in the family not to contract the virus. Bacon said she feared for both her mother and brother’s life.

“It was scary,” she said. “He was around us and he was the one to help my mother every night. She as dementia and is bedridden.”

Bacon said their mother was hospitalized for 21 days and improved.

“She is home now and doing well,” Bacon said.

Prater said he started out just feeling tired and knew something was not right.

“I didn’t have a temperature or cough or any of the usual symptoms,” he said.

He demanded COVID test and isolated himself at home. On Feb. 12, four days after testing positive, Prater headed to Merit Health Natchez ER because his oxygen level dropped to 82, he said.

About a week later, Prater said he woke up in at Merit Health Central in Jackson without remembering how he got there.

“I’d been away from home 40 days and part of it didn’t know where I was,” he said after finally being discharged Wednesday. “In Jackson, I woke up and couldn’t move any of my extremities.”

Prater said his lungs and kidneys both stopped working and his body swelled up. He had to have a tracheotomy and be placed on dialysis.

Prater was transferred back to Merit Health Natchez on March 16, where he was placed in rehab to get his strength back. Prater said while he was recovering, he celebrated his 65th birthday in the hospital on March 20 and missed the birth of his first granddaughter, Jailyn Marie Patten, on March 26.

“That was a very emotional time for me,” he said. “The fifth-floor staff got the doctor and came in with cake and sang Happy Birthday. My oldest daughter came in with the laptop and friends and family came on a Zoom meeting so we could see each other.”

Prater said he can walk again and is still having to receive dialysis three times a week hoping his kidneys will start to work on their own.

“Merit did a wonderful job of taking caring of me,” he said. “Covid was mean to me.

My heart rate, my lungs were affected and I’m still having to receive dialysis hoping my kidneys will start working again. … I’m glad to be home and finally start to live again.”

Prater thanked God and prayer for his survival. He said he received texts and phone calls from friends all over the country with well wishes and prayers for healing. The first stop Prater made after finally being discharged was to see his mother and then to meet his grandchild, he said.

“Family is important,” Prater said. “I have the greatest family, friends and congregation. I’ve had people call me from Texas, Chicago, Memphis and Mississippi. I still get texts every day. They didn’t give up on me.”