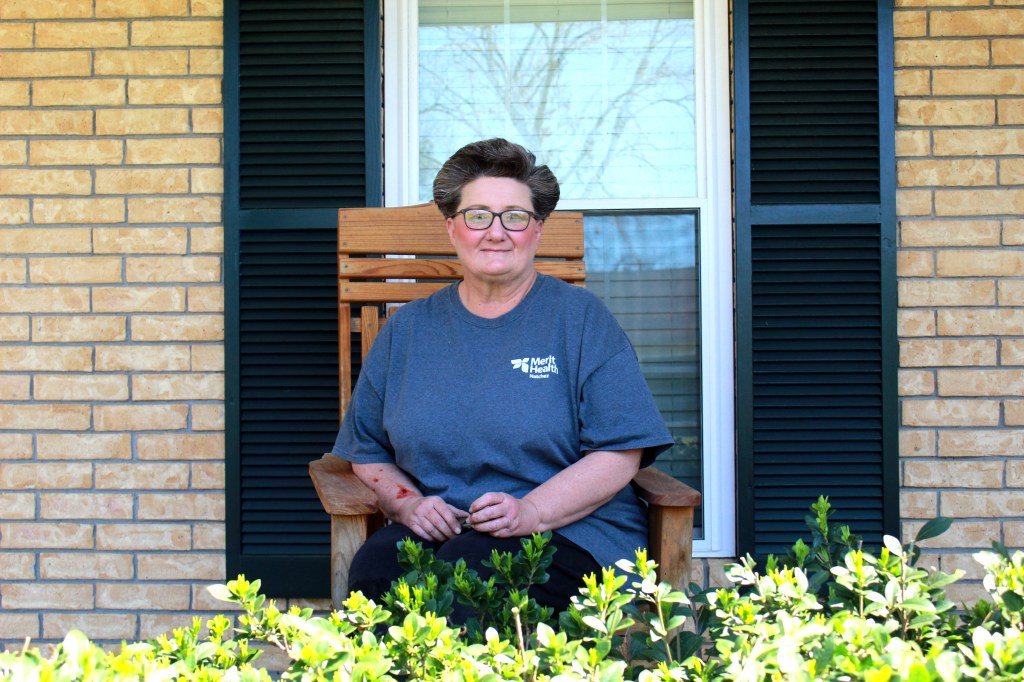 Vera Messer sits in front of her home on Meadow Drive in a rocking chair she bought in New Orleans. Messer is a life long resident of Adams County, and has been married to her husband Keith for 42 years. (Hunter Cloud The Natchez Democrat)

Vera Messer was putting down pine straw in her flowerbed to straighten them up in the warm sunshine on Good Friday in front of her home on Meadow Road where the dart landed Monday.

Every other Friday she would have been making hot tamales for her friends and family, she said. About five or six years ago, she just decided to make tamales, and has continued to make them.

“One morning I got out of bed and thought I’m going to post on Facebook that I’m going to start making hot tamales every other week and see what happens. It took off,” Messer said.

A lifelong resident of Adams County, Messer grew up in Morgantown and attended South Natchez High School. She studied office management at Copiah Lincoln Community College in Natchez after graduating from South Natchez in 1977.

She said she has worked at RW Delaney’s Construction Company as an office manager for the past 40 years. She handles the everyday business of the company, with her job she said.

Messer has been married to her husband Keith for the last 42 years. They both grew up together on Cottage Drive in Morgantown, she said. One house separated them growing up, and their fathers worked for Armstrong Tire, she said.

The secret to a long and healthy marriage they said was to know when to keep their mouths shut in arguments, Keith said.

“We don’t really argue, never have really argued,” Messer said. “Where I go she’s with me, and where she goes I’m with her.”

When she is not working, she is with her husband watching her grandson play soccer or baseball. She moved to her home on Meadow Drive about eight years ago from Morgantown, she said.

The neighborhood is quiet and around some of her neighbors also grew up in Morgantown, she said. The quiet nature is one of the reasons why she has not left Natchez.

“I just like the small town atmosphere. I don’t like big cities,” Messer said. “I like to be able to get to where I’m going, get through and then get back home. Instead of having to fight traffic. “