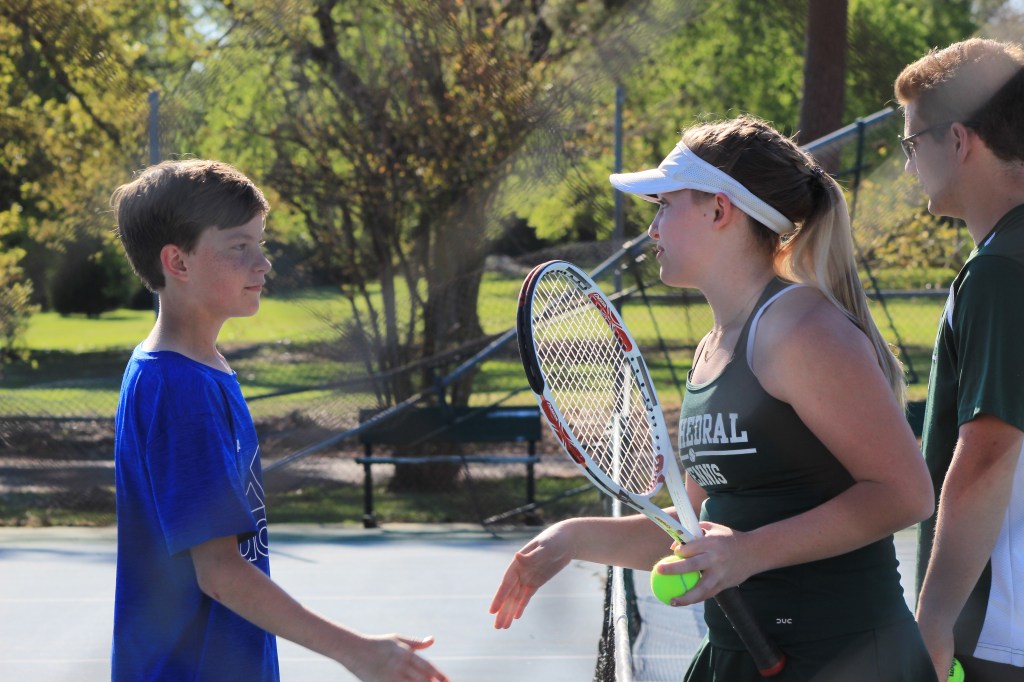 At left, ACCS tennis player Wanderlei Griffin shakes hands with Cate Drane of Cathedral after a mixed doubles match. ACCS lost to Cathedral 9-0 on Monday, but is focused on growth this season. (Hunter Cloud The Natchez Democrat)

Cathedral and ACCS mixed doubles was the last game to finish up on the courts at Duncan Park Monday afternoon.

Green Wave won the match 9 courts to 0, but the score was not the only concern for head coach Beth Foster, who is trying to get her team ready for district play. Her team is filled with experienced players, she said.

ACCS head coach Nicole Gatson said  she has inexperienced, young players competing. She said she was concerned with getting growth out of the matches for her team.

“I see so much potential in these guys,” Gatson said. “They come out here. They practice hard every single day. They conquer a lot of fears. This is only their second match. There is a fear of getting out on the court. We just have to get past it. We are going to be stronger every year.”

Tennis is a gentleman’s sport. Even though the games between Adams County and Cathedral can be competitive and fierce, emotions do not boil over like they do in basketball, baseball or football. Foster said Cathedral’s main rival right now is Brookhaven Academy.

Due to the small-town nature of Natchez, Adams County, Vidalia and Concordia Parish, a lot of the kids at both ACCS and Cathedral know each other, she said.

“My team could rattle off everyone’s last name because they know them all,” Foster said. “There isn’t really even a rivalry.  They have all grown up together. Especially when Trinity closed, some of them came to Cathedral, and some came to AC.”

Gatson was a teacher at Trinity, and when it closed, she took a job at ACCS, she said. Foster said she gets along with Gatson. She said it is special to share a town with another school.

“There are sometimes when we say ‘hey do you want to team up your singles players and get some practices together,’” Foster said. “A lot of teams are not going to do that, especially when it is a district thing. Nicole and I work really well together. It just makes it easy.”