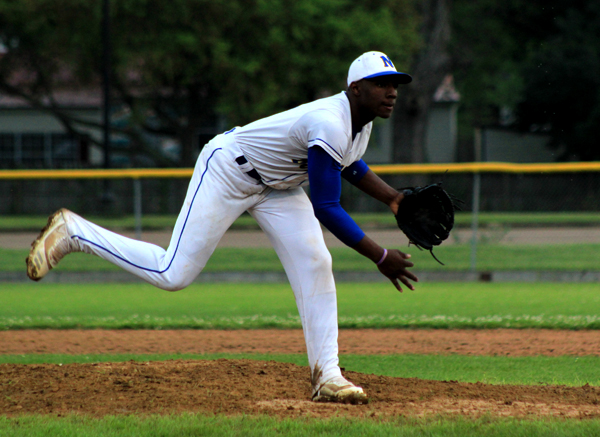 Trylon Minor throws a pitch against Jim Hill last Tuesday. Minor threw in the Bulldog's win over Forest Hill on Friday. He also went 2 for 3 with an RBI and four stolen bases. (Hunter Cloud The Natchez Democrat)

NATCHEZ — It was indeed a Good Friday for the Natchez High School Bulldogs last Friday afternoon as they won the MHSAA Region 6-5A championship thanks to a doubleheader sweep of the Forest Hill High School Patriots last Friday at Chester Willis Field.

In each game, Natchez High got good pitching, good defense, hit multiple home runs and stole a lot of bases. Bulldogs head coach Dan Smith said he was proud for the kids winning the region championship.

“I’m happy that we won district. It’s a big accomplishment for the kids,” Me personally, I’m looking for a deep run in the playoffs. We’ve still got (nine) more games before that.”

Game one saw Jaylin Davis and Trylon Minor combine to pitch a no-hitter as the Bulldogs used a 16-run barrage in the bottom of the first inning to cruise to a 20-1 win over the Patriots in just two and a half innings.

Davis got the start in the opener and lasted two innings. He gave up one earned run, struck out five and walked six. Smith said Davis got too relaxed in the top of the second inning after the Bulldogs’ big first inning and that’s what led to all the walks and Forest Hill scoring its only run of the game.

“Jaylin threw the ball well. He threw strikes. You can’t defend the walks,” Smith said. “He had a few walks. Sometimes I think kids relax when they get up. He’s only a ninth-grader. That’s the thing that I preach a lot – when we get up, throw strikes.”

Trylon Minor came on to pitch the top of the third inning and struck out the side in order to end the game. Of the 14 pitches he threw, nine of them were for strikes. At the plate, he went 2-for-3 with one RBI, two runs scored and four stolen bases.

Devin Winchester went 1-for-2 with a triple, one RBI, 3 runs scored and two stolen bases. As a team, Natchez High had 24 stolen bases.

It was a rough outing for Forest Hill starting pitcher Donald Passmore. He was charged with the loss after giving up 12 runs, 10 earned, on five hits with one strikeout, four walks and one hit batter in one-third of an inning. K. Taylor came on in relief and allowed eight runs, only two earned, on two hits with three strikeouts, three walks and one hit batter in one and two-thirds inning.

The defense behind both Passmore and Taylor did not help their cause as the Patriots committed nine errors.

In the second game, Trevon Henry, McGruder and Winchester each hit home runs as the Bulldogs used a 10-run third inning to beat the Patriots 14-1 in four innings.

McGruder did get off to a rough start on the mound. He hit leadoff batter Jaden Griffin-Woods with a pitch and later loaded the bases after a Cleveland Puckett single. He then walked Cortez Williams, which brought in Griffin-Woods and gave Forest Hill a 1-0 lead..

McGruder settled down after that over the next two and two-thirds innings. He only issued one walk, didn’t give up a base hit and struck out seven batters over that stretch top pick up the win. He ended up with eight strikeouts. Trylon Minor came on in relief to pitch the top of the fourth inning and, just like the first game, struck out the side in order to earn the save.

Puckett was the losing pitcher as he gave up 14 runs, 11 of them earned, on 10 hits with four strikeouts, four walks, and three hit batters.