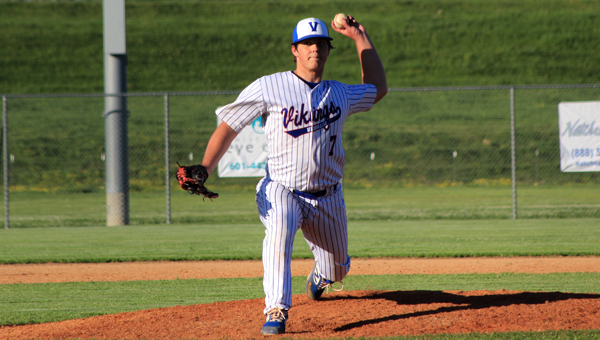 VIDALIA — After splitting its first two games with Rayville High School earlier in the week, the Vidalia High School Vikings need a win over the Hornets last Saturday to win the series and keep their playoff hopes alive.

Vidalia got that thanks to two innings of offense and a solid pitching performance by senior Peyton Fort as the Vikings needed only five innings to take care of Rayville 16-4 in a key LHSAA District 2-2A game at the Concordia Recreation District 3 Complex.

“It’s big. We kind of shot ourselves in the foot in the first six games of district,” Vikings head coach Nicholas Kennedy said. “We still control our own destiny. If we keep winning, we’ll be in the right place at the right time.”

Fort’s outing was indeed impressive considering what he has had to deal with the previous two seasons.

“His sophomore year, he had a knee injury. Last year ended early because of COVID. It was kind of sad. It took two years of his career away from him,” Kennedy said. “He’s a bulldog. That’s a good way to describe him. He had very good command of his fastball. Touched 80 a couple of times, which is really good. He doesn’t talk much, but he doesn’t have to.”

Rayville scored two runs in the top of the third inning to make it a 12-2 game, but Vidalia responded with four runs in the bottom of the fourth, which was highlighted by Brett Walsworth’s solo home run.

Kennedy added that hitting hasn’t been an issue at all for his team this season, but pitching was earlier in the season.

“Pitching has come around a lot,” Kennedy said. “This game we had two strikeouts. We don’t strike out very much. We put the ball in play and see if the other team can make plays. We’ve got to clean up some things on defense.”

Vidalia (6-9, 3-3) plays host to Delhi High School Thursday at 5 p.m. Then the Vikings play a doubleheader at Monterey High School on Saturday, first against Harrisonburg High School at 11 a.m. and then against host Monterey at 1 p.m.