Vikings never give up in defeat to Harrisonburg 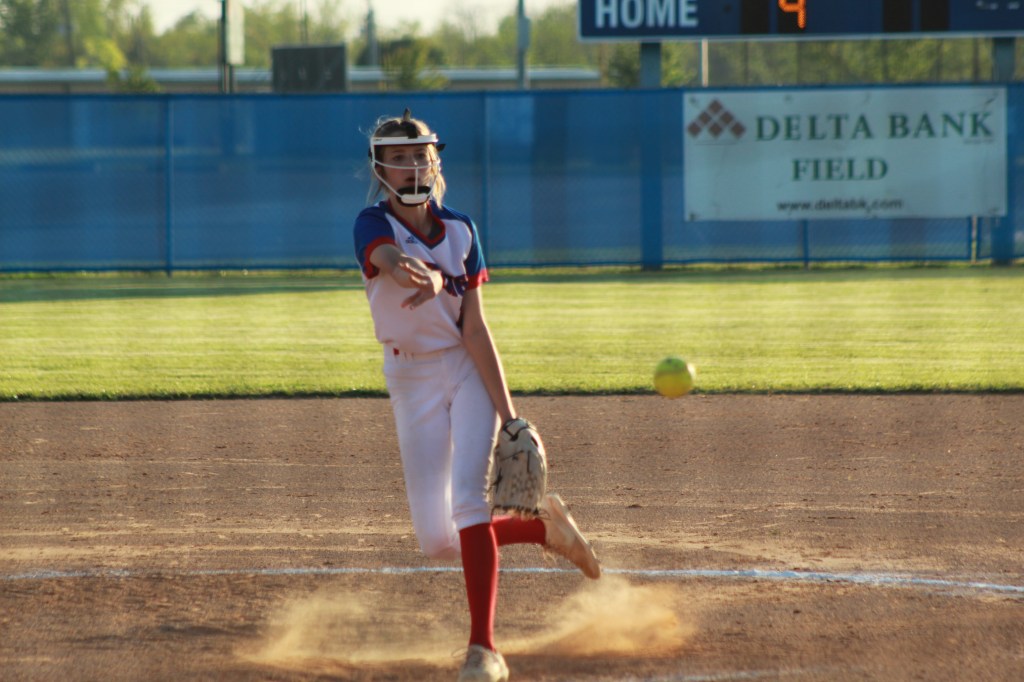 Allie LeBlanc throws the ball in a game against Harrisonburg Monday night. LeBlanc had a bases-clearing triple to tie the game but the Vikings could not hang on and lost 7-4. (Hunter Cloud The Natchez Democrat)

Vidalia refused to go down without a fight in their 7-4 defeat to Harrisonburg Monday evening, Vikings head coach Forrest Foster said.

It was 4-1 in the bottom of the fifth when Allie LeBlanc stepped up to the plate and delivered a bases-clearing triple to tie the game.

“I knew I had to get the ball in play and score those two runs. It is what the team needed,” LeBlanc said. “I was looking for an outside pitch because that is what she had been throwing me before. I was going up there, and I knew I was going to get outside pitches. That is what happened.”

She said it felt good to tie the game because it gave the team a chance to win the ball game. She also pitched in the game despite a shoulder injury.

Harrisonburg answered her triple by scoring two runs to take a 6-4 lead in the top of the sixth inning. Vidalia gave up another run in the top of the seventh to go down 7-4. When they gave up that run, Foster said he knew it would be hard to come back.

“It bothered me a little bit because it’s hard to score three to four runs in an inning. Even though we did it earlier in the game,” Foster said. “I felt rather comfortable that we were going to score two anyway. But it just didn’t happen. It’s just part of it. That is why you play the game.”

Despite the defeat, the Vikings never gave up and kept battling, Foster said. LeBlanc was one of the players who never give up, he said. She is a freshman, but her and the other kids never quit, he said.

The Vikings were retired in a 1-2-3 inning to end the ball game. LeBlanc was on the on-deck circle when the final out was recorded.

“I had confidence in myself. Knowing how I hit the at-bat before, I really wanted to go up and bat,” LeBlanc said. “You win some, and you lose some. You go onto the next game and hope you win it.”