Bulldogs took a swing at tennis, stick with it 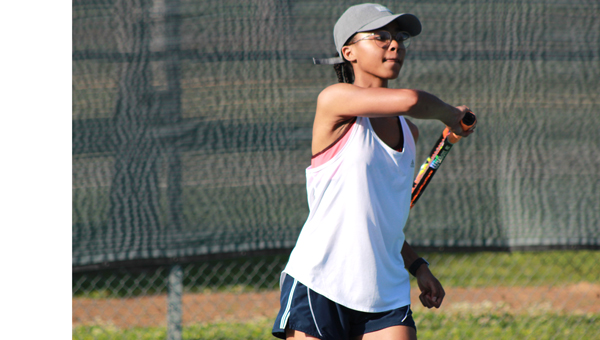 Asia Robinson returns a serve during a tennis practice for Natchez High School. Robinson is a senior and started playing the game because it is different. (Hunter Cloud The Natchez Democrat)

Asia Robinson, Alexis Woods, and Tyrese Wilson joined the tennis team at Natchez High School for different reasons, but they have stuck with the sport through COVID.

Robinson and Woods said they found their way onto the tennis court for Natchez High School because tennis was different than any other sport they had ever played. Robinson is a senior, and she has played tennis since ninth grade, she said. Before then, she ran track, and she also is a cheerleader, she said.

“It’s fun. It is a different type of sport,” Robinson said. “It is really out of the ordinary because you have to coordinate your hand and your feet motions.”

Smith said she is into uncommon things. For example, she likes to collect random items in addition to rocks and crystals, she said.

She said she found an interest in tennis by watching it on TV, and she decided to give it a try. Tennis is fun for her because she enjoys hitting the ball, she said.

“I tried a whole bunch of other sports, and they weren’t really my thing,” Woods said. “I really got into tennis though.”

She said she looks forward to their match against Brookhaven on Wednesday because she knows the team can beat them. The Bulldogs need to stop making simple mistakes, such as hitting the ball into the net or not keeping the ball on the court, she said.

“I started playing tennis because my best friend was playing tennis,” Wilson said. “I wanted us to do something together because we hardly spent any time together.”

They play as double partners and practice together. Tennis has taught patience, they said. The game forces them to think and slow down. They each try to take the game one step at a time, they said.

Wilson said this year has been challenging because the juniors have missed out on high school experiences such as prom due to COVID. Last year’s tennis season was cut short because of COVID, and this year the team has only been able to play one game, Robinson said.

“We make the best out of it though,” Robinson said. “We still have fun outside. We are out on the court all the time.”