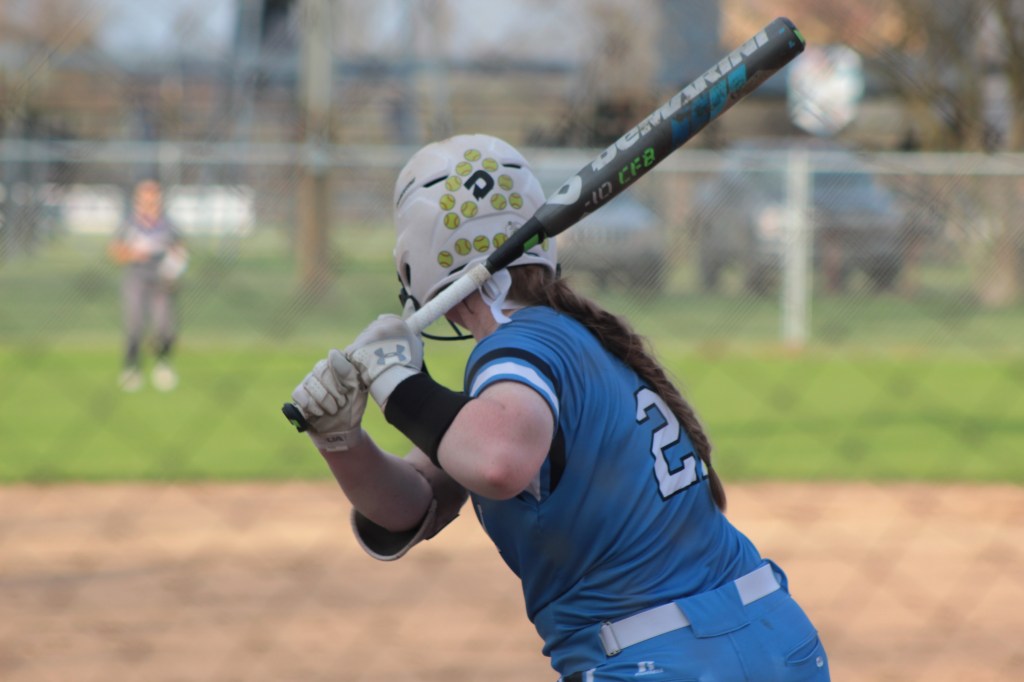 Jaden Boydstun hit a home run to lead off the game for the Storm. Delta Charter thrashed the Gators 16-1 Tuesday night. (Hunter Cloud The Natchez Democrat)

FERRIDAY — Jaden Boydstun’s lead-off home run in the bottom of the first inning set the tone for a big game for the Delta Charter Storm Lady Storm and a rough one for the visiting Delhi Charter School Lady Gators Tuesday afternoon.

When the first inning was done, Delta Charter was on top 6-0 and the Lady Storm rolled to a 16-1 win over Delhi Charter in just four innings. Boydstun ended up going 3-for-3 with two runs batted in and two runs scored — and was one of several Lady Storm players who had stellar performances at the plate and on the base pads.

“I liked the way we were aggressive at the plate. Our defense was much cleaner. We were more aggressive on the bases. I don’t know how many stolen bases we had. We seemed to play with more confidence,” Lady Storm head coach Jeannie Beach said. “Everybody got to play. That was our goal – get up by 15 runs and let everybody play.”

The Lady Storm pounded out 11 base hits, four of them for extra bases, committed no errors, and as a team stole seven bases. Lily McCarthy went 2-for-3 with one RBI, two runs scored and had a team-leading three stolen bases. Tiara Jefferson was 1-for-1 with two runs scored, was walked twice, and stole two bases.

Shyvlie Blaney also came up big for Delta Charter, going 2-for-4 with a team-leading four RBIs and scored tow runs.

Of McCarthy’s performance, Beach said, “She’s aggressive and little and quick. We’re trying to use that to our advantage. She was very aggressive on the bases.”

Beach added that Delta Charter stole third base a couple of times during the game. The Lady Storm added a run in the bottom of the second inning to go up 7-0 before Delhi Charter scored its only run in the top of the third inning. No. 20 (no name given), who was the losing pitcher, doubled off starting and winning pitcher Makenzy Hawley and later scored on a triple by No. 17 (again, no name given).

“They got a few hits off Makenzy, but she pitched good,” Beach said. “My little seventh-grader, Ally Atwood, she drove in the run that ended the game.”

Atwood went 1-for-3 with a double, three RBIs, one run scored, reached on an error twice, and was hit by a pitch. Hawley went three innings, gave up one earned run on three hits, struck out five and walked one. Rami Burks pitched the top of the fourth inning, allowed one hit and struck out one.

Delta Charter (8-11) return to LHSAA District 2-1A action on Thursday when it travels to Bastrop, La. to take on Beekman Charter School. The Lady Storm will then play in the Mangham Tournament this weekend. They take on host Mangham High School on Friday at 3 p.m. and then are scheduled to face Class 5A Ouachita High School at 9 a.m. Saturday and Sterlington High School at 11 a.m. Saturday — if the weather permits. Heavy rain and thunderstorms are forecast for the Miss-Lou region late Friday afternoon through Saturday morning.