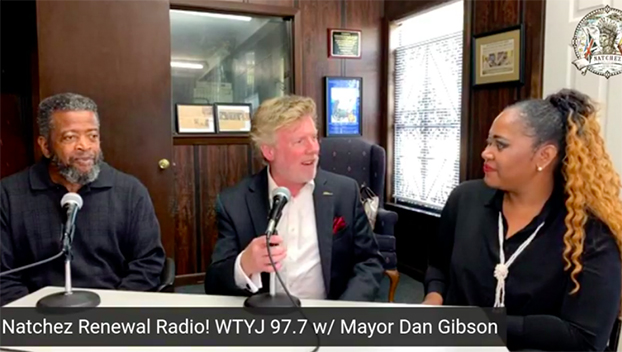 NATCHEZ — City of Natchez Mayor Dan Gibson has set out to build a tribute to the United States Colored Troops in Natchez Memorial Park.

An announcement about the new monument was made during Gibson’s “Natchez Renewal Radio” show Tuesday evening, where Gibson was joined by the new monument committee chairman Robert Pernell and City of Natchez community liaison Jessica Hawkins on WTYJ radio station at 97.7 FM.

Gibson invited members of the community to join a monument task force to give their input and help move the project forward. Those interested in joining can email Gibson at mayor@natchez.ms.us, he said.

Gibson said the goal is to have the new monument placed prominently in Natchez Memorial Park outside of St. Mary Basilica. The monument would honor those who were taken out of slavery to serve in the United States Army. The U.S. Colored Troops were first recruited during the American Civil War and made up approximately one-tenth of the manpower in the Union Army.

The story of Forks of the Road — which was one of the largest slave markets in the country — will also be an important aspect of the monument’s design, Gibson said, adding he had been in quiet talks with the Historic Natchez Foundation’s Executive Director Carter Burns and the Director Emeritus Mimi Miller about the project since January.

“Some at Forks of the Road were in chains, immediately became free, and were given orders to dismantle the slave market and use the materials to build (Fort McPherson),” Gibson said.

The site of Fort McPherson, designed by Capt. Peter Hains of the Engineering Corps, begins at the intersection of North Canal and Madison streets. According to the National Park Service, it could accommodate 5,000 troops and provided an unobstructed view of the river and surrounding countryside.

Gibson said remnants of the fort still exist at the Natchez City Cemetery.

“It’s not right that (the confederate) monument be there and there not be one that is, in my opinion, more about Natchez, than that one — the U.S. Colored Troops,” Gibson said. “There is far more history there that hasn’t been told that needs to be told.”