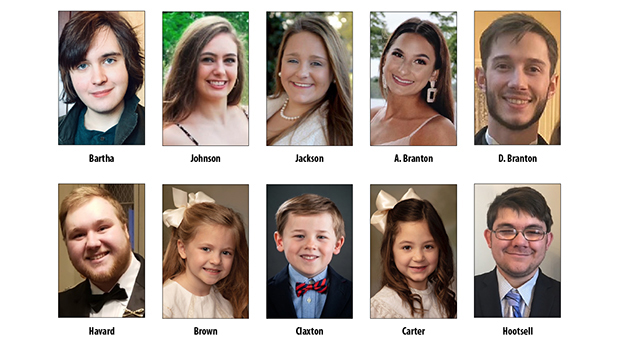 Abigail “Abby” Lynn Branton s the daughter of Woody and Jenny Townsend and Donald Branton and the granddaughter of Lynette Tanner and the late Buddy Tanner of Frogmore, Tamara King and the late Jerry L. King of Monticello, and Wayne and Diane Branton of Ferriday.

She graduated from Cathedral High School in 2020 and studies Business and Marketing at Louisiana State University. She was a member of the National Honor Society, Key Club and Peer Ministry at Cathedral and is a member of the Phi Mu Sorority at LSU.

Abby enjoys traveling, spending time with friends and fashion and design. Her previous NGC Tableaux participation includes three years in the Polka and two years in the Wedding.

Joanna is a Junior at Delta State University, where she is a Mass Communications major in Broadcast Journalism, a member of Phi Mu sorority, Phi Theta Kappa honors society, National Merit Honors, and currently contributes as a Journalist to her college newsletter and is a cheerleader.

She has participated in Little Maypole, Big Maypole, Polka, the Bride Varina Howell Davis, Can-Can and the Royal Court.

She graduated from Cathedral High School in 2017 and studied at Copiah Lincoln Community College in 2017 and 2018. She plans to graduate from the University of Southern Mississippi in Hattiesburg with a degree in Biological Science with a medical emphasis and a minor in chemistry this fall.

She is a member of the USM Marine Conservation Club and is a Science Olympiad event supervisor. Sydney’s interests include educating the public and advocating rights for people with service dogs.

Julia is currently a kindergarten student and is enrolled in an Abeka homeschooling program. She is a member of St. Mary Basilica and attends Mrs. Ward’s catechism classes. She enjoys gymnastics and ballet and loves all things outdoors, especially catching frogs. Julia’s previous NGC Tableaux participation includes Little Maypole.

Benjamin is currently a pre-kindergarten student at Madison Ridgeland Academy in Madison.  Benjamin is a member of First Baptist Church Madison where pre-COVID he was active in Sunday school, pre-school choir and Wednesday Blast activities. He is active in community league baseball and soccer. He currently takes golf lessons at the Country Club of Jackson and swim lessons at The Club at The Township where he will participate in the swim team this upcoming summer. For the past nine months, he has taken piano lessons at Ms. Kay’s Kids and Keys, performing in a piano recital. Benjamin enjoys swimming, riding his bike, building Super Mario Legos and fishing with his dad, baking and reading with his mom, singing and dancing with his sister and spending time with his friends.

Mary Collins Carter is the daughter of David and Paige Carter. She is the granddaughter of Mr. and Mrs. Kinney Carlton of Natchez and Mr. Craig Carter of Hammond, Louisiana.

Mary Collins attends Cathedral Elementary School where she is in Mrs. Baroni’s Kindergarten class.  She attends First Baptist Church where she is active in Mission Friends and the children’s choir. Mary Collins takes gymnastics at Natchez Gymnastics. She also attended Natchez Ballet Academy for two years.

Mary Collins enjoys gymnastics, playing with her friends, her dog Annie Bailey, playing softball and most of all riding her horse Silverado. She loves dancing and jumping on the trampoline with her sister Harper (NGC Page 2016) and cheering on her brother Coleman (NGC Page 2012) at baseball, football and basketball games.

Maximilian Mokcsay Bartha is the son of Ms. Christine Bartha of Natchez and Lt. and Mrs. Laszlo Bartha of Southlake, Texas. He is the grandson of Mr. and Mrs. David Dollar of Natchez, Mr. and Mrs. Tamás Bartha of Cape Cod, Massachusetts, and Ms. Zsuzsanna  Mokcsay of Santa Cruz, California.

Max attended Trinity Episcopal Day School in Natchez and is a graduate of Copiah Lincoln Community College in Natchez with an Associate of Arts degree. He is currently a senior at the University of Southern Mississippi where he is majoring in Library Science and is a member of the Phi Kappa Phi Honor Society.

Max is fluent in Japanese and plans to spend a year in Japan teaching English after graduation. He was named Who’s Who among students at Co-Lin in 2017 and 2018. He served as coordinator and head editor of the nonprofit Copiah Lincoln Community College Literary Magazine for 2018 and 2019. He enjoys travel, photography, composing music and spending time with family.

Donald Conerly “Conner” Branton is the son of Woody and Jenny Townsend and Donald Branton and the grandson of Lynette Tanner and the late Buddy Tanner of Frogmore, Tamara King and the late Jerry L. King of Monticello, and Wayne and Diane Branton of Ferriday.

He attended Cathedral High School, Baton Rouge Community College and is studying Automotive Technology at the University of Northwestern Ohio. Conner was a member of Cathedral’s baseball team for four years and played basketball his senior year.

He enjoys all things in the automotive industry and prides himself with learning the latest in the field and applying to his car. He also enjoys spending time with his friends.

His previous NGC Tableaux participation includes Polka for one year, the Wedding in which he played the groom for one year and three years on the royal court.

Griffin was homeschooled and graduated in 2019. He also achieved the highest rank of Eagle Scout in Boy Scouts of America. His hobbies include hunting, scouting, and camping.