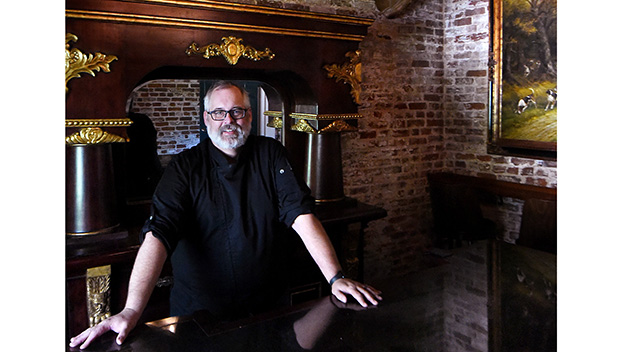 Ben Hillyer | The Natchez Democrat The Castle Restaurant will reopen with Chef Doug Hosford at the helm. Hosford returns to the Natchez food scene after having leaving in 2011 to open a restaurant in Baton Rouge.

NATCHEZ — The Castle restaurant at Dunleith looks to open soon with far more than a “dusted-off” version of the venue locals know and love, General Manager John Holyoak said.

The first-floor pub of the restaurant is projected to open early next month followed closely by the upstairs portion.

The property has been closed for a little more than two years after its previous owners declared bankruptcy.

Mike Blattner and Joe Jaeger of the J Collection, a New Orleans-based hotel group, purchased Dunleith in November 2019. The property has since undergone serious renovations, particularly at the restaurant.

The swimming pool, which was well more than 30 years old, has been completely renovated, transforming the traditional white and blue underwater surface into an intimate dark lagoon, Holyoak said. The pool deck has also been renovated and soon a fire pit will be added followed by an outdoor bar and food service area, he said.

Couches and a 75-inch television will provide a place for patrons to casually sit, eat, drink and socialize while watching sports.

Later on, the upstairs part of The Castle will take the formalness of the dining experience up a notch. There will be room for more than 40 people in an outdoor seating area overlooking the pool, Holyoak said.

Retractable windows allow the space to feel comfortable year-round and still let the natural air in during the spring and summer. A second-floor service bar provides an intimate area with a temperature-controlled display case with various selections of wine.

Once everything is open, The Castle will be able to seat close to 225 people.

“The Castle is not getting dusted off. It is not just a little paint. I think people are going to be really excited when they walk in the door,” Holyoak said.

The approximately 225-year-old building has seen a facelift with new paint, lighting, flooring and eclectic furniture but is not completely unrecognizable, he said.

A classic-looking bar is fitting to The Castle’s hunting theme.

“I think we had about 75 applicants,” he said. “The thing that we liked about Doug is he is from Natchez and wants to be here. He has an affinity for the town and knows a lot of people and is an excellent chef. All of the things that are important to us in a hire, we found in Doug.”

Hosford said he grew up in Jackson with family in Natchez and went to Mississippi State University and later Johnson & Wales University in Charleston, South Carolina.

He worked at various resorts, hotels and country clubs throughout the southeast United States before starting a Natchez catering company in the early 2000s called High Cotton, which was where The Kitchen Bistro is today.

Hosford and his family moved away from Natchez in 2011. He currently lives in St. Francisville and owns the Fat Cow restaurant in Baton Rouge. Hosford said coming home to Natchez is important for him and his wife Karry.

“Coming home was a big thing for us,” he said. “We have kids and love being a part of the community. … We had a great following as far as our cooking classes and would love to one day roll that into the Dunleith property.”

The primary difference between The Castle now and before is that it will be open to all patrons, whether they are celebrating a wedding or anniversary or looking for a quick bite to eat on the way to a local sporting event, Holyoak said.

Hosford has put together two different small menus for the upstairs and downstairs part of the restaurant, he said.

“In the past, the Castle has had a perception of being very formal and very unapproachable,” Holyoak said. “People will be able to come here on a Tuesday or Wednesday night or on their anniversary — but it doesn’t have to be their anniversary.”

Behind the scenes, Hosford said the two kitchens have also been gutted and redone to a high standard as well as the banquet kitchen in the main house.

“Locals will never see those spaces but will benefit from them with the quality of the food and the speed of service,” he said. “What Mike and John have done here is going to shock locals in a great way. … Our goal is to make sure everything in the property is used and everyone can enjoy it.”

Hosford describes the food that will be served as “upscale southern” using as many local ingredients as possible. The menu will also change with seasonal items such as brazed mustard greens, pan-fried squash cakes and fried green tomatoes, he said.

“Some we will grow ourselves and some we’ll buy from local sources. You may see us at the Farmers Market wearing chef coats,” he said. “Our quality is going to be the highest level we can attain. We’re going to have a different style pub menu that is a little more casual — upstairs is more formal — but we can service everything.”

A few of the famous offerings at The Castle, such as the Godchaux Salad and Gouda Fries, will also be revived, he said.

Both The Castle and Dunleith are now hiring for all positions from servers and kitchen staff to housekeepers and front desk workers, Holyoak said.

Approximately 20 positions have already been filled while the J Collection looks to hire approximately 30 more, he said.

Job listings are posted at www.jcollectionhotels.com/careers. Those interested are also welcome to visit the site and pick up an application between 1 p.m. and 5 p.m., he said.