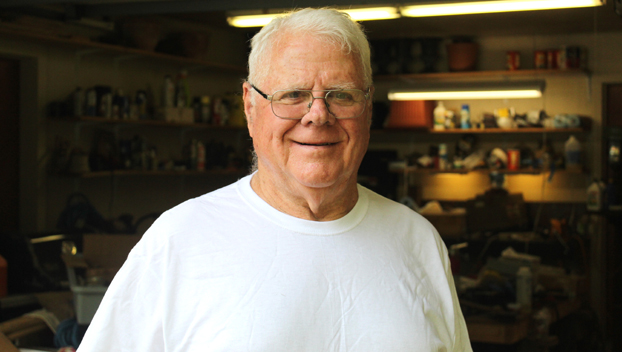 Richard Harriss stands in front of his garage where he "fools with antique cars". Harriss was working on rewiring a 1954 Austin Healey at his home on Northhampton road, close to where the dart landed Friday. (Hunter Cloud The Natchez Democrat)

Birds sang in the trees as Richard Harriss looked up from his green 1954 Austin Healey convertible at his home on Northampton Road, close to where The Dart landed Friday.

Underneath another tarp in his garage is a 1954 MG TF. He said he has to finish working on the Austin Healy before he can work on rebuilding the MG TF.

The Austin Healy had an electrical fire a year ago, so he has worked to rewire the car ever since, he said.

“I fool with these antique cars,” Harriss said. “It has been a big task to straighten some things out. That is what I do (now). The doctor said ‘Keep on doing what you are doing.’ I am 82, and I try to stay active.”

When his parents divorced, he moved to Connecticut with his mom and brother. He attended Amherst College in Amherst, Massachusetts.

After graduating, he spent 10 years in New Orleans before moving back to Natchez with his wife, he said.

He owned a farm 30 miles south of Natchez on the Homochitto River where he grew corn, cotton and soybeans for 30 years, he said. He has been pleased with his time in Natchez.

“I hear a lot of people complaining all of the time, but I’m happy with the place,” Harris said.

“We have been here a long time, and (we have) seen a lot of people come and go,” Harriss said. “They made a movie and used the house next door. They filmed a scene right across the street and (the neighborhood) was pretty active around here for weeks. That was probably the most excitement of the neighborhood. Otherwise, it has just been quiet.”