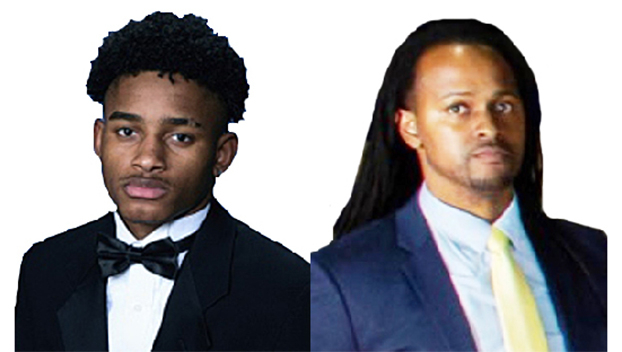 From left, Dionté Thomas, a senior at Natchez High School, and his teacher and basketball coach David Haywood were both recognized in the state STAR program.

NATCHEZ — Natchez High School senior Dionté Thomas said his primary goal in life is to be successful at anything he does.

From an academic standpoint, Thomas has done just that.

He has been named Natchez High School’s STAR Student for the 2020-2021 school year by the Mississippi Economic Council and M.B. Swayze Foundation, who sponsor Mississippi’s STAR program.

To be named STAR Student, Thomas had a composite score of 29 on his ACT; the highest score possible is 36 and the average score is 21.

Each STAR Student designates a STAR Teacher for their school and Thomas chose his physical education teacher and basketball coach, David Haywood.

“(I have Coach Haywood) for first period and for after-school practice and he always knows if we have academic school work we need to work on. He lets us work on it and helps us sometimes. He makes sure we have everything done and he will either check-in with our teachers or our teachers will check in with him. He makes sure we put or school work before basketball,” Thomas said.

Haywood has coached and taught for a total of 14 years at Natchez High School and has been the head basketball coach for six years of that time, he said.

“He is a great kid all around and is very respectful. Everything he does prepares him to be successful, whether on or off the court,” Haywood said of Thomas.

Thomas is the son of Tunisia Felton and Fred Harris. He plays basketball, golf and is a member of the National Beta Club, National Honor Society and Student Government Association.

Thomas said he has not decided which college he will attend next fall, however, he plans to study biochemistry and pre-medical science with the hope of going to medical school to become a surgeon.

Thomas’s decision to pursue a medical career was influenced by his family, he said.

“I want to become a cardiothoracic surgeon because my family has a history of heart problems,” he said. “That has influenced me a lot.”