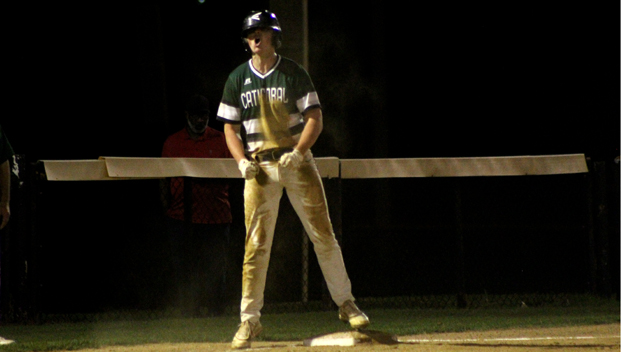 Hollis Lees celebrates on third base after his triple in Cathedral's 13-0 win over ACCS Monday night. (Hunter Cloud The Natchez Democrat)

Cathedral jumped out to a two-run lead courtesy of a sacrifice fly and a ball thrown away into the dugout and never looked back en route to a 13-0 win over Adams County Christian Monday night.

A double by Paxton Junkin drove in the third run of the first inning. Cathedral added to their lead with a one-run chopper to the right side of the infield to make it 4-0 in the second. ACCS assistant coach Brandon Ross gave credit to Cathedral.

“Hats off to Cathedral. They had their backs against the wall and punched us right in the mouth.” Ross said.

The fifth run scored when the pitcher tripped going for a ball, but a Green Wave runner hesitated coming home, and the Rebels tagged him out in a run down.

Hollis Lees led off the inning with a line drive over the centerfielder’s head for a triple. When he dove into third base he said he got so much dirt on him his pants button would not snap shut.

“I thought (the center fielder) had a good jump on the ball. I thought he had it, but as soon as it hit the ground. I knew I was getting to third,” Lees said. “I went down head first, and all the dirt went right into my hands. Dirt got stuck in my (pants) button, so I had to play the rest of the game with unbuttoned pants. All that was holding them up was my belt.”

A two-run double brought Lees across the plate and gave Cathedral a 7-0 lead. A wild pitch scored the eighth and ninth runs of the game.

A single scored two more runs to give Cathedral an 11-0 lead in the fourth inning. A dropped fly ball scored the 12th run of the game. An error made it a 13-0 game, which would be the final score as the Rebels failed to get a run across the plate in the bottom of the fourth inning.

Cathedral’s dugout was lively during the game. Green Wave players chanted and encouraged their teammates. Lees said it made a difference in the game.

“We brought the most energy we have had all year long,” Lees said. “That was huge for us. I give props to everyone in the dugout for staying up and not getting down. We are ready to dominate now. It gives us a lot of confidence.”

Cathedral and ACCS will battle again on Friday in a doubleheader at Chester Willis field in Liberty Park.