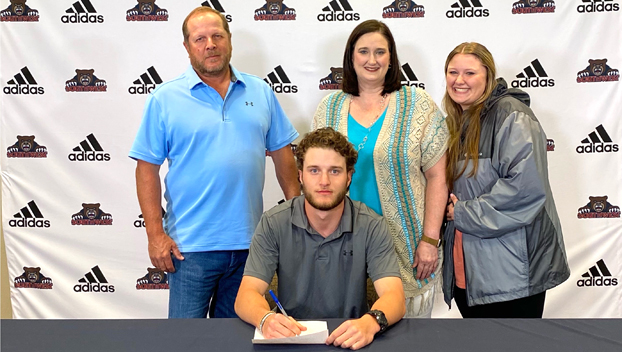 Back row from left, father Andy McDaniel, mother Kim McDaniel and sister Kaitlin McDaniel. In front, Jacob McDaniel signs to play college baseball at the University of Arkansas at Monticello. Jacob is in his third year at Southwest Mississippi Community College because COVID cut his sophomore season short. (Hunter Cloud The Natchez Democrat)

Adams County Christian alumnus Jacob McDaniel said he felt a weight lift off of his shoulders when he signed to continue his college baseball career for the University of Arkansas at Monticello Wednesday morning.

He said when COVID shut the world down during his sophomore season at Southwest Mississippi Community College, he had nowhere to go, and he was stressed. The feeling he had when he signed to become a Boll Weevil was indescribable, he said.

“It is a great feeling of achievement,” McDaniel said. “I have been at Southwest for three years, working to make myself better, make the team better. It’s always in the back of your mind. ‘Am I going to make it to the next level?’ When that opportunity happens, it is just (a feeling of) overwhelming joy and excitement.”

He said the lowest point during COVID was during the summer when he was not sure if he could come back to Southwest Mississippi Community College or not. McDaniel said he had a lot of things on his mind.

He said he was not getting a lot of interest from schools and was unsure if he would sign with anybody. He said he was excited when the University of Arkansas at Monticello told him they would offer him a scholarship because he had tried to go there last year.

“Everything fell into place, and it worked itself out in the best way possible,” McDaniel said.

Arkansas at Monticello is a three hour and six-minute drive from Natchez. McDaniel said his family is sad he will be so far away, but he believes the excitement of him getting to play somewhere will make up for it.

He said he had several friends who left Southwest Mississippi Community College to play at UAM. Their baseball team is good, he liked the school, and they were the best choice for his major in Forestry.

He said when he finishes college, he will see where life takes him. It may mean a return to Mississippi, or he may stay in Arkansas, McDaniel said.

His father works in forestry, so forestry is an industry he has been around his whole life, he said. Forestry was the direction he said he felt he should go.

“I’m the type of person who likes to work outside and get my hands dirty,” McDaniel said. “I don’t want to be cooped up in an office all day. I’m not that type of guy. I want to go out and work outside.”