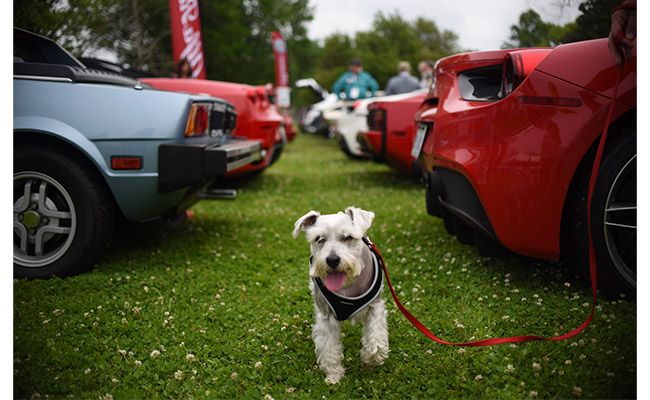 "Mr. B" is miked by Mike Larkins while looking at the cars during the 2019 Euro Fest Classic European Auto & Motorcycle Show at Rosalie in Natchez. (File Photo | The Natchez Democrat)

NATCHEZ — Due to a forecast of four straight days of rain in Natchez, the Natchez Euro Fest has been rescheduled for Sunday, April 18, organizer Mike Marsh said Wednesday.

The European car show, which was originally scheduled for April 10, has been postponed for the second time due to rain and thunderstorms.

Marsh said the show will now start at 11 a.m. Sunday with the awards presentation beginning at 3 p.m.

Instead of the traditional location on the grass outside of Rosalie, the car show will be on Broadway Street running north and south along the bluff, Marsh said.

Entries will be parked at the southern corner of the Natchez Grand Hotel stretching along both sides of the street.

All parking will be on pavement and cars will be placed on a first-come basis and not by class. However, there will be designated parking for the Grand Saloon Class, Marsh said.

Cars will start lining up as early as 9 a.m. Sunday, he said.

Marsh said car show entries would continue to be considered until Friday, April 16.

A “Pick Up Your Packet” party for exhibitors and sponsors of the car show will be held on Saturday, April 17, from 5 to 7 p.m. at EPYK, a vintage inside-outside venue at 511 Main St. at the corner of Locust Alley.

Those with questions can email Marsh at www.mike_marsh@bellsouth.net.