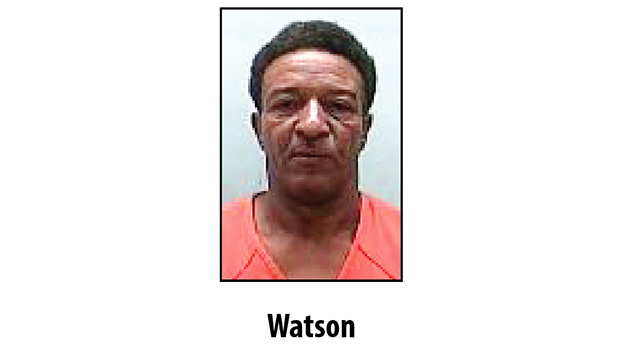 VIDALIA — A Concordia Parish jury found Marvin Watson, of Clayton, guilty of two counts of first-degree murder on Thursday for the June 2019, killing of his wife and her 12-year-old son.

“This was not Mr. Watson’s first murder trial,” Burget said, recalling a 2015 hung trial for the 2014 death of Peter Jones III in Adams County, in which Watson pleaded not guilty

Before his probation ended, his wife Meghan McCoy Watson and her 12-year-old son LaFrederick McCoy were found lifeless in their home at 211 Anderson Road in Clayton after they had both been shot with an AR-15 .223 caliber rifle.

“He shot and wounded a 12-year-old boy, who ran to the back of the trailer and hid in the master bathroom. Mr. Watson shoved the gun through the bathroom door and shot the child several times. The child did not expire in the bathroom but drug himself into the kitchen after Mr. Watson left and was found lying near his mother’s body. And that is what we presented to the jury when Mr. Watson took the stand and claimed it was self-defense — just like he claimed it was self-defense in Mississippi,” Burget said. “The jury here did not believe Mr. Watson and found him guilty of two counts of first-degree murder.”

Watson’s sentencing is scheduled for April 28 under the direction of 7th District Judge John Reeves.

Burget said Watson is facing two life sentences without the benefit of probation, parole or suspension of sentence — which is mandatory for such a conviction in the State of Louisiana.

“We are happy to get justice for the McCoy family, which was been a long time coming. It took us two years to get it to trial with a lot of COVID-related continuances for the last few months,” Burget said. “We were able to start trying cases again April 1 and started on this trial April 12 with the jury selection. I would like to thank all the people who came out for jury duty. It is a very difficult thing to listen to that type of testimony.”