Jon Borum reflects on his time cooking at The Masters 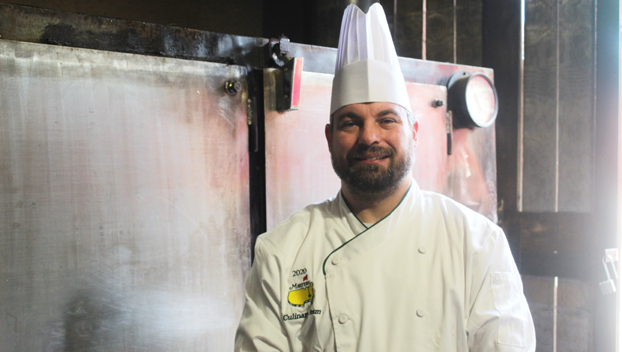 As Hideki Matsuyama celebrates his first Masters win, Pig Out Inn chef Jon Borum reflects on a week of waking up at 3 a.m. to cook at Augusta National.

He said he was scheduled to work from 5 a.m. to 7 p.m. but he sometimes worked longer. The most he worked in a day was 19 hours, he said. He prepared elevated southern comfort food for Ike’s, one of five restaurants in Berckmans Place.

He said he pretty much saw the inside of the kitchen all day. In the kitchen there was no place to sit down, so he was on his feet all day, he said. In orientation, Berckmans Place executive chef Roberto Bustillo told the chefs they were going to be stressed, and pushed to their limits.

“I have had a good work ethic. I have just been taught to head down and do your work,” Borum said. “You get your job done and then you can play later. I just knew it’s only for a couple more hours. Then it was only a couple more days and then you will be home. It’s also the freaking Masters so you can’t just give up. You have to keep going.”

Augusta National expects perfection with its food, he said. Pimento cheese sandwiches had to be cut into perfect squares to be served or else they were thrown away. He said he only had to throw away 10 or 15 sandwiches. He said it seemed like there was a lot of food waste.

His nickname became Jonny Eggs because he prepared scrambled eggs for all seven restaurants at Berckmans place. He said he cooked about 150 pounds of eggs a day.

He said breakfast was from 7 a.m. to 10 a.m. and then he has an hour-long break to reset and finish with the lunch menu. Lunch went from 11 a.m. to 6 p.m. He was given the honor of frying chicken because the woman who fried the chicken for a long time retired, and he is from Mississippi, he said.

“I fried the hell out of some chicken,” Borum said. “We brimmed them everyday. The next say we would dip them in flour and put them in the hot grease and fry chicken. I was doing about 200 orders a day. It was a non stop situation.”

Due to culinary school, he has not played golf in a while, and he was not an avid golfer in the first place, he said.

He had seen The Masters before, and while he said he is not been a big fan of the tournament, it was still an honor to be able to work there. Augusta National was strict on its rules for the workers and patrons. Cell phones are not allowed on the grounds, and Borum said he left his at the hotel so he could not capture any scenes.

“I got a chance to go to the gift shop and I got to see the entrance to the actual course, hole No. 1 and the giant leaderboard,” Borum said. “That was pretty cool, but it sucked because you can’t take pictures of anything. So, it is just based off of my word.”

There were times where he wanted to give up and quit, he said. Being away from his family was the toughest challenge, he said. His wife was taking care of their one year old and their six year old children by herself while working a full time job. He said he was not sure who had it harder.

Borum said he is glad he did it because it was fun experience, even if it was filled with hardwork. He did not go home empty handed, he said. On the final day, each restaurant gives out an executive chefs coat with The Masters emblem on it to one person, he said.

“They usually don’t give it to a first year person,” Borum said. “Apparently I fry chicken very well, because they gave it to me.”