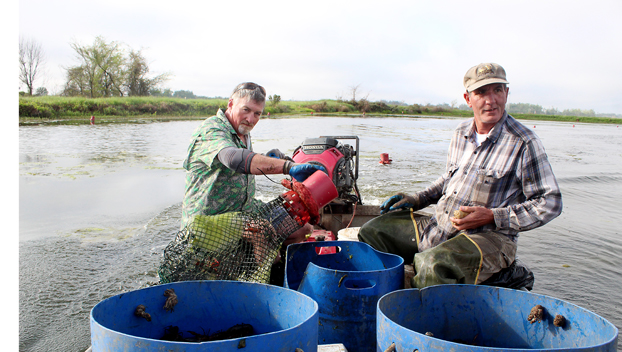 Bo Mahony, left, pulls in crawfish from traps at the Black River Crawfish Farms in Jonesville. Koepp Lanehart puts new bait in the traps before putting them back in the water.

Bo Mahony and Koepp Lanehart circle crawfish ponds to grab crawfish traps and dump their catch into plastic tubs in their boats each day at dawn.

They rebait and reset the traps for Black River Crawfish Farms after dumping crawfish into the plastic tubs. Mahony said they catch a snake in the crawfish traps occasionally. Lanehart said one of the ponds has an alligator in it.

If Mahony misses a trap while piloting the boat, he circles back and tries again, he said. Black River Crawfish Farms Owner Barry Richardson said he started raising Crawdads in 1998 at his farm in Concordia Parish off of Louisiana 565.

He raises the crawfish in 200 acres of ponds from Nov. 1 to July 31, he said. He plants rice, and he lets the ponds drain so vegetation can grow back in the three months he takes off from crawfish farming, he said.

Vegetation provides cover to protect the crawfish from birds and varmints, he said. Crawfish take three to four months to mature. With his ponds in operation for nine months, he can produce two crops, he said.

Farms in South Louisiana may produce one crop of crawfish because some farmers have to harvest the rice first before they can pump up their ponds, he said. He starts filling up his ponds with water on Aug. 12, he said.

“Right now I’m seeing a bunch of babies in my ponds while I’m harvesting,” Richardson said. “That is going to be my future crop coming up in the first of June and all of July. That will be a big crop.”

He said fishing constantly helps the crawfish grow. He said a higher harvest means less competition for resources and more room for crawdads to grow.

Crawfish increase in size by 41 percent every seven to nine days, he said. Some of the crawfish burrow themselves into the mud after they breed and will emerge again for the next crop, he said.

Statistics from the Louisiana State University Agricultural Center said Louisiana farmers harvested 127.5 million pounds of crawfish out of 225,800 acres in 2014.

Using those statistics, the average harvest of crawfish per acre was 564.66 pounds. Last year Richardson’s farm produced an average of 1,400 pounds of crawdads per acre with 200 acres in total, he said.

Hurricanes and excess rain has harmed crawfish farming in south Louisiana, he said. Rain washes out vegetation, and often causes oxygen deprivation in ponds, he said. Those factors impact the crawfish harvest, but they have not impacted his operation, he said.

“Up in the central part of the state, I’m not impacted by those types of things,” Richardson said. “We didn’t get the tremendous rains like they did in South Louisiana. I’m still able to produce a tremendous crop this year. It all looks good for me.”

The ice storm in Central Louisiana did not kill any crawfish, but it did slow down production for about three to four weeks, he said. All of the water in the water column has to freeze to kill the crawfish, he said.

Richardson has a hand in all three stages of the crawfish industry, from the raising, supply and sale of crawfish. In the last three years, he has run the restaurant Craws, Claws and Tails on Carter Street in Vidalia.

“It complemented my crawfish business,” Richardson said. “I’m able to start from the base level and collect profits from the farm and the restaurant. When I first started, I sold a lot of crawfish to restaurants and boiling houses in Monroe. “