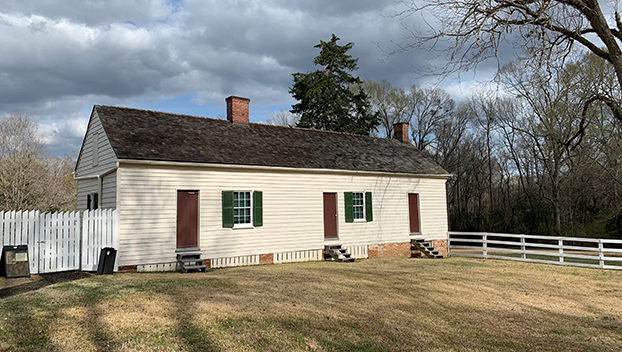 NATCHEZ  — If you look closely enough at the bricks that make up historic places like Melrose, you can sometimes find fingerprints from the people who built them, as nationally recognized historian Joseph McGill pointed out on Saturday during a Natchez visit for “The Slave Dwelling Project.”

McGill said it was 11 years ago when he first had the “crazy idea” to sleep in places where American slaves were kept to draw attention and awareness to an uncomfortable part of history that often gets overlooked.

McGill’s idea became “The Slave Dwelling Project,” in which he traditionally invites people to stay with him in slave dwellings and have campfire discussions about slavery.

In respect to health and safety during the COVID-19 pandemic, McGill live streamed his tours of Forks of the Road and Melrose on Facebook Saturday before hosting a virtual campfire discussion via Zoom from a slave cabin at Melrose.

At one point, one of McGill’s live videos from Natchez  had more than 100 people watching.

Some viewers commented that they were watching from North and South Carolina, Pennsylvania, Georgia and Arkansas.

McGill said he noticed that often slave dwellings were not being talked about in his travels to “big houses” across the country.

During the Zoom event, stirring conversations started about the property and the people who lived there. Natchez National Historical Park Historian Jeff Mansell said the slave cabins at Melrose were spacious compared to others at remote plantation houses.

A pair of wooden slave cabins sit apart from the rest of the estate. The cabin to the right originally consisted of three rooms with no interior doors that housed three separate families and the other two-room cabin would have housed two families.

One of the Zoom participants, Marilyn Reed, asked how the narrative at Melrose has changed to diversify the history told there.

Mansell said the National Park Service has used estate records to allow visitors to draw the name of an enslaved person from a hat and would tell visitors what they know of that person’s story through the tour.

Unfortunately for some, their story ends at a burial site, Mansell said.

Another Zoom participant, Dontavious Williams, mentioned how trees growing up around burial sites carry the DNA of the people buried there and should be preserved instead of cleared away to mark the burial site.

“It’s hard to tell these stories but it is important that we tell it, both the good and the bad,” Williams said. “There is something to understanding that what they went through is how we are here. … These were men, women and children and many of us are their descendants.”