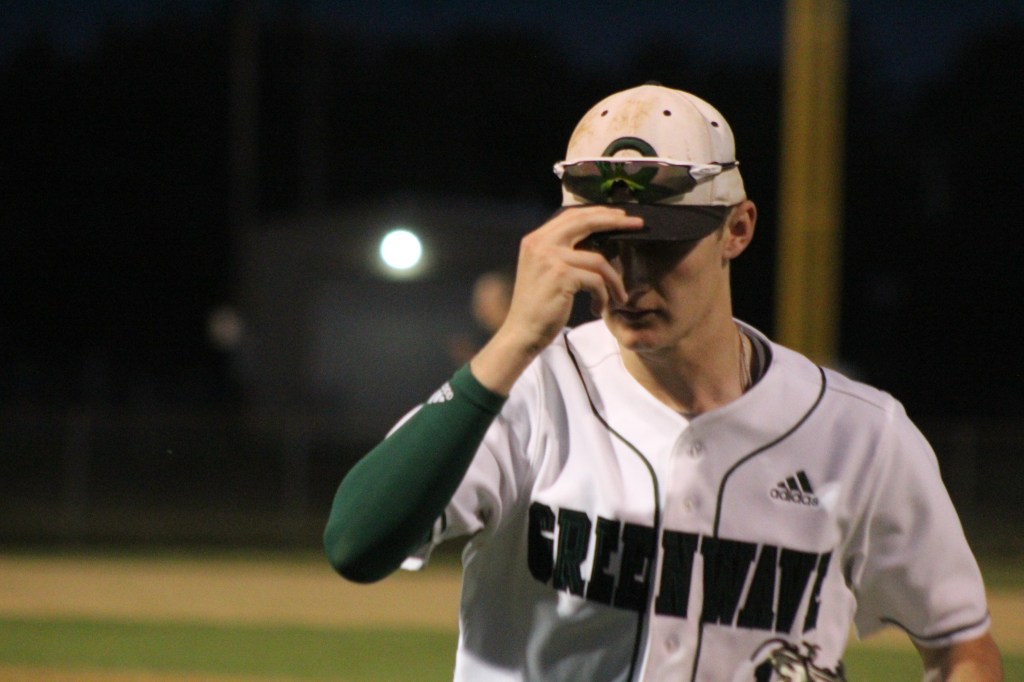 Senior Sam Mosby walks off the field in the middle of the sixth inning against Hartfield Academy. Tuesday night's 14-0 loss may be the final game the Green Wave played at Chester Willis Field. (Hunter Cloud The Natchez Democrat)

Cathedral was down by just four runs in the fourth inning and had a few chances to get some runs on the board before Hartfield Academy took care of business and put up 10 runs in the last three innings to win 14-0.

Less than a day prior, the Green Wave played against ACCS and made a quick turnaround to play Hartfield Academy in the first of a three-game series. Green Wave senior Sam Mosby said the team had some good moments in their game.

“I think we had a lot of good moments here tonight,” Mosby said. “I think if we hit a few balls a few inches different, a lot of big things could have happened. You can’t worry about if you advance or not. You need to go out there and play.”

He said he was still sore from having pitched in the game against ACCS Monday night. Pitch count rules limited who could pitch against Hartfield in the game Tuesday night, but everyone should be good to pitch in Thursday’s doubleheader, he said.

Head Coach Craig Beesly said the challenge for his team was to come back and stay focused against Hartfield Academy that quickly after an emotional win against their crosstown rival.

“We were still on our high from getting into the playoffs and beating our crosstown rivals. You worry about whether these kids are going to be able to focus and come out and play,” Beesly said. “I thought that was one of our better games defensively. I thought Noah (Russ) did a good job of limiting them to one or two runs in an inning. It got away from us towards the end, but I was pleased with the way we played today.”

Hartfield is talented and one of the best teams in the state, he said. Cathedral will have its work cut out when they travel to Flowood to play a doubleheader in which the Green Wave must win both games to advance. He said when you get on the field, anything can happen. That is why you play the game.

Mosby said it is weird knowing each moment he takes the field could be his last as a Green Wave. He said the end of his career at Cathedral has not changed how he approaches the game. He said he tries to take in every moment he can.

“Every single game, I have been trying to take it all in and enjoy it,” Mosby said. “You never know. It could be your last. I have always gone 100% every single time I can. (The end) makes me think about it more and to enjoy (the game) more than I have in the past. I have always had another game. Now, I know it could be it.”