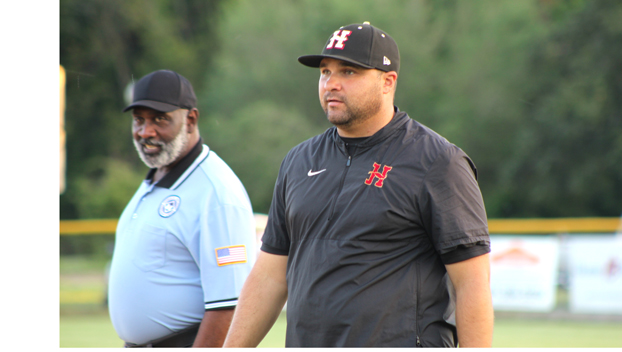 Moises Rodriguez standing in the first base coaching box for Hartfield Tuesday night. He said it was his first time being back in Natchez since he left to go to Hartfield. He was previously the baseball and basketball coach at Trinity. (Hunter Cloud The Natchez Democrat)

There was a familiar face standing in the first base coach’s box as Moises Rodriguez made his return to Natchez with Hartfield Academy Tuesday night for their game against Cathedral.

He said he was a baseball coach at Trinity the final year it had a baseball team in 2017-2018 before closing. He said he had not been to Natchez since he took a job at Hartfield Academy.

“I did not know it was closing when I first took the job,” Rodriguez said. “After they decided to close, I had some different opportunities to go to different places. I thought it was better for me and my family to go to Hartfield after that.”

Mississippi sand gnats welcomed him back to Natchez as they swarmed players, coaches, and people in attendance at Chester Willis field. Some fans offered him a spray to combat the bugs as they conversed with him.

He said they did not have a gnat problem in Flowood. He said it was good to be back in Natchez, and he estimates he was cleaning out his house to sell it the last time he was in town.

“Even though I was here for a year, I still have a lot of friends in this area,” Rodriguez said. “I have a lot of great memories from Natchez. My son, who went to Trinity, was like ‘I miss a lot of people from here.’ It’s good to be back here and to see some of the guys I coached and I coached against.”

He said he did not think he coached any of the kids on Cathedral’s team, but he did see some former basketball players in attendance. He said he misses the closeness of the community of Natchez.

Hartfield is a good place, a good school, and a great baseball program, he said. He has a lot of great feelings about being in Natchez again, he said.

“When we first moved here, we were thinking we were going to be here for the long run,” Rodriguez said. “Unfortunately, what happened to Trinity, its closing, was heartbreaking to us. I would have loved to stay here, but I had some better opportunities elsewhere.”