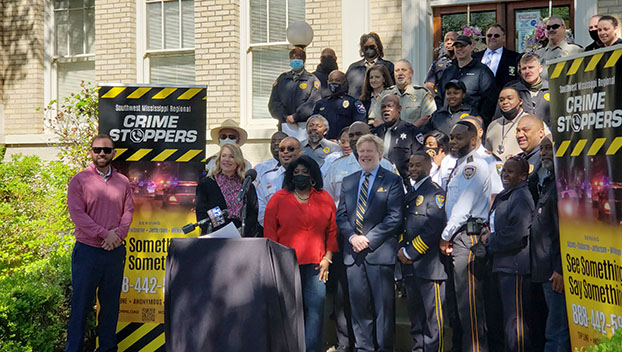 If the tip submitted through Crime Stoppers leads to an arrest, the informant can be rewarded up to $1,000 for the information.

The nationally recognized Crime Stoppers program was founded in 1976 and has since been reinvigorated to make anonymous reporting safer and easier for the citizen, law officials said.

“The Sheriffs and Chiefs of the Southwest Mississippi Regional Crime Stoppers are proud to join forces with the Department of Public Safety Commissioner Sean Tindell to promote our Crime Stoppers Program in an effort to make Adams County, Claiborne County, Jefferson County, and Wilkinson County a safer place for its citizens to raise their families and call home,” law officials said in a news release.

“Crime Stoppers is a proven tool that is used across the country to help solve crimes. Further, the State of Mississippi has 32 active programs statewide that have helped solve numerous crimes over the years, everything from homicides to drug cases. Your Southwest Mississippi Crime Stoppers program provides a completely anonymous avenue for citizens to report information regarding a crime in your community.”

Anyone that has knowledge relating to a crime that has occurred in their community is encouraged to call the Southwest Mississippi Regional Crime Stoppers tip line at 1-888-442-5001. The tip line is totally anonymous and rings into the national Crime Stoppers tip center based out of Texas. Your telephone number is completely scrambled so that there is no way to identify the caller.

“We are taking a stand. The community has spoken and they want something done … but we need the citizen’s involvement,” Daughtry said.