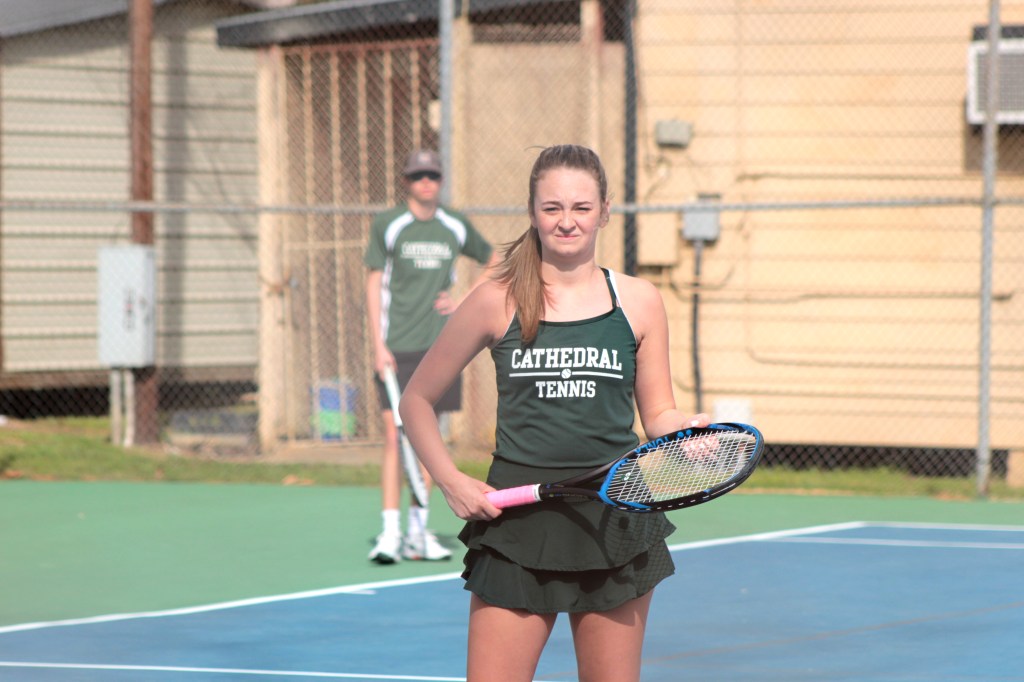 Caroline Guedon will represent Cathedral at South State along with her playing partner Huddy Lees. (Hunter Cloud The Natchez Democrat)

Cathedral had seven out of nine courts advance from district to south state head coach Beth Foster said. One of the two courts that did not advance was Annalyce Riley because she was sick with a stomach virus, Foster said.

Foster said it is different playing a district match because there is a lot of pressure put on the players to perform. Kids want to place in the top two because they advance to south state.

“It is the only way they can keep playing,” Foster said. “If you lose that first match, then you are done. It is just a little bit more pressure but I like having the district tournament. If you were beaten in a district game earlier, you have the opportunity to come back and tweak the thing you got wrong in that match.”

Cathedral will play at South State on Tuesday in Brookhaven, she said. The competition they face in the South State tournament gets tougher every year, she said.

Harris and Hartley Pyron are seniors who have played tennis their whole life. The last two seasons they have played together as doubles partners. In district, they both came in second place.

“We had a close match in the finals. We made it so that is good,” Hartley said. He added it is different playing with his brother. “We argue probably more than others, but it is still fun. We get along most of the time.”

A positive of the brothers playing together in doubles matches is they are closer, Harris said. Their chemistry is higher than other people on the court, he said.

They enjoy winning together, Harris and Hartley said. In their match against Brookhaven Academy in the district tournament, the two fought back after being down in their first set but ended up losing in the third set, Hartley said.

Caroline Guedon is a senior and is playing her final doubles matches with Huddy Lees, a sophomore. Guedon said her favorite moment of the district tournament was beating Brookhaven Academy because she and Lees lost to them 4-6, 1-6 at the beginning of the year.

She said the end of her time at Cathedral is bitter-sweet because she has played on the team since seventh grade. She said she knows the team will be okay when the seniors leave. She said she is trying to soak up moments with her doubles teammate Lees.

“Bonding with my partner, since this is our last year together, making memories is fun,” Guedon said. “I have played tennis with these people since seventh grade. Huddy and I became partners during my freshman year. She is probably one of the best playing partners I have ever had. We connect really well.”

She said she used to get nervous about going to tournaments. At the district, she told herself to have fun and to enjoy it. Foster said she thinks her team has a chance to keep their seasons going to the State finals.

“I think they have a good chance,” Foster said. “They just have to be on their game.”