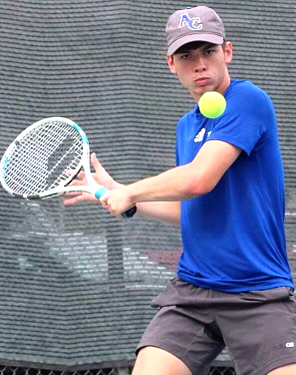 Nolan Owens was the only Adams County Christian School tennis player to advance to South State.

He said due to Silliman Institute not having a boy’s team. He was automatically in the semifinal against Brookhaven Academy and he beat BA’s player 6-4 and 6-1. He advanced to the final and played a player from Cathedral, he said.

“It was a close match. It was a great match,” Owens said. “The final score was 7-5, 6-4. It was really close. I just couldn’t ever get the lead on him. He would be up and I would have to come back and tie it, but it was a really good match.”

He said all that mattered was advancing to South State, which he did. Owens is a senior and he played both baseball and soccer for AC. He said if he is able to get further or somehow win state it will be the sweetest revenge against Cathedral.