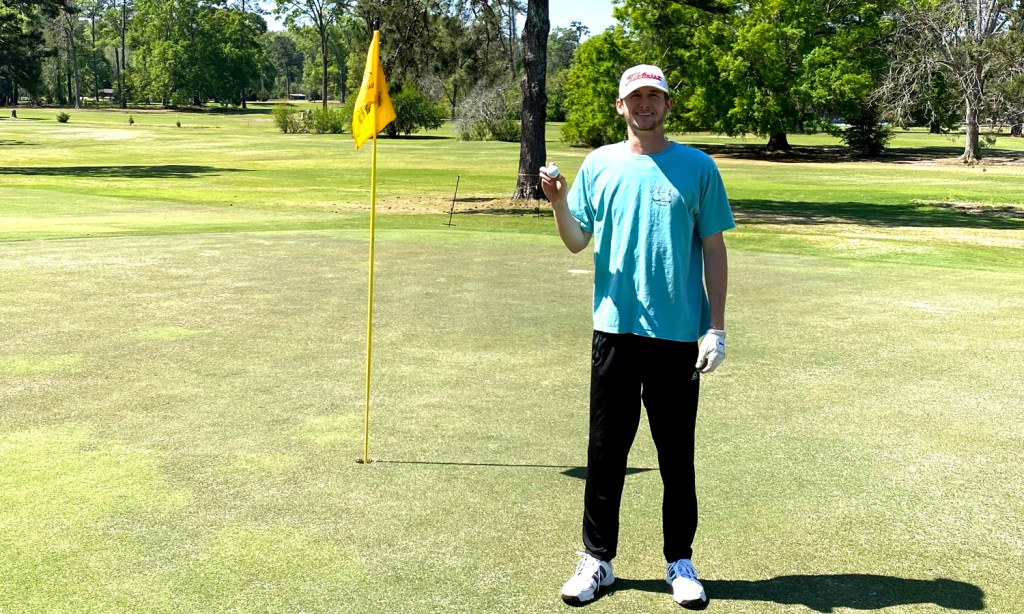 Davis Sharp made a double eagle on the 10th hole at Duncan Park with a Ping 4 Hybrid from 210 yards on April 14.

He said he had made some eagles in the past, but the closest he ever came to a double eagle was being ten feet from the hole. For anyone unfamiliar with golf, a double eagle is three shots under par, and the chances of making a double eagle are 6 million to one, according to Golf World Writer Bill Fields.

“It was all luck,” Sharp said. “I beat my buddy (Landon Seyfarth) by five strokes on that hole, so I rather be lucky.”

He said he and Seyfarth play a couple of rounds together when they can, and they like to play as a scramble. Seyfarth had a double bogey on the hole, which is not all that bad for a par five, he said.

Seyfarth and Sharp played as a team against another pair of golfers on the front nine betting two dollars a hole to keep things interesting.

His drive on hole No. 10 landed on the right side of the fairway, which put a big ole pine tree in his way, he said. Sharp said he looked at his options and wanted to hit a shot to the left of the tree, but he decided to hit right at the tree.

“They say trees are 90% air, so I was testing that theory out,” Sharp said. “Somehow, the shot rose over the tree and I looked right past the tree and saw it hit on the green.”

He said he knew he did not have good control of his shot, so he decided to shoot at the tree rather than to the left of it.

Sharp took his putter and flung it into the air in celebration. He said he got a little too hyped up on the green.

“That hole is flat, so there is nowhere for a ball to hide,” Sharp said. “When I didn’t see anything behind the hole my heart started racing a little bit. There was only one place where I thought it could be.”

His Taylormade ball is in a special pouch in his golf bag, he said. A Ping limited edition 50th anniversary Anser Putter head is the only thing in that pouch, he said.

He found the club head in his grandparent’s storage unit, he said. He is not sure how the shaft broke.

He said he did not have a golfer who was his role model, or idol growing up because he did not start playing golf until high school. Sharp is currently a PT student at the University of Mississippi, he said.

“I write most of my papers on golf biomechanics,” Sharp said. “It helps me stay entertained while writing tedious academic papers. I would love to find a way to be a PT for golfers on the PGA tour. That is something I could get out of bed every day with a smile on my face.”