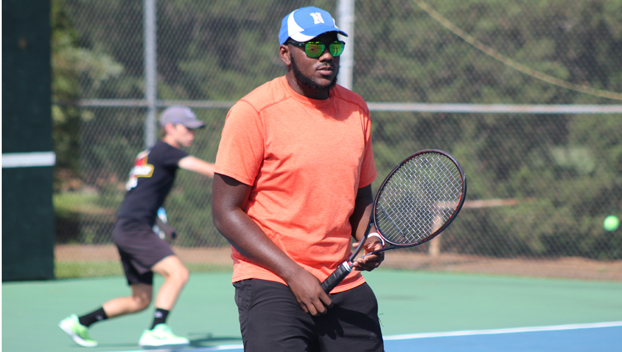 De'Marcus Jackson gets ready to return a hit during Natchez High School's tennis practice on Monday. Jackson and his mixed doubles partner Asia Robinson are playing in the individual state tournament in Oxford on Wednesday and Thursday. (Hunter Cloud The Natchez Democrat)

De’Marcus Jackson and Asia Robinson will step onto the court one final time as doubles partners this Wednesday and Thursday. They will represent Natchez high school in the individual state tennis tournament in Oxford.

Jackson said he felt the same way ahead of what is their final state tournament. He said he is ready to experience State, and he will wear his golden shades if the sun is bright enough.

The two play together as mixed doubles partners. Robinson said they have grown over the past year in how they communicated with each other on the court. She said she liked playing with Jackson because he brings strength to the game.

Last year, Jackson played boys doubles and Robinson played girls doubles, he said. When Natchez High School tennis coach Delores Whitley announced he would be playing mixed doubles with her, he was excited, he said.

“It’s fun playing with other people,” Jackson said. “Playing with a girl, they don’t try to hit it too hard. They just try to keep it in the court. Playing with Asia, she is always trying to rally. I’m not worried about her trying a super hard shot every time she gets a shot like I would with a guy.”

While they both get nervous before matches, Jackson said he just listens to music to calm down. Robinson said she when she warms up the nerves go away.

As they prepared for their last match together, Robinson said it is a sad and bittersweet feeling knowing the end of their careers is near, but they will have fun and play their best. Jackson said it is sad but he is also excited for the end of his career.

“It is exciting because we have had a good hoorah. We spent a couple of years playing around, and this year we got to play together,” Jackson said. “Next year I’m going to come back and tell them what to do and what not to do. I will be that person on the sideline coaching.”