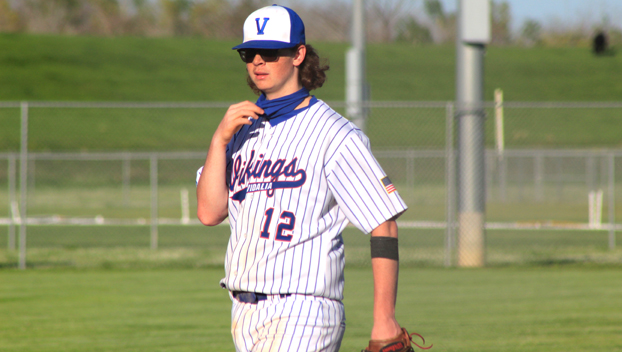 Luke Williamson is one of the six Vikings who had never seen a playoff game before this season. Vidalia is already looking to keep building their team culture. (Hunter Cloud The Natchez Democrat)

Vidalia’s 2021 baseball season came to an end against D’Arbonne Woods Monday night in the first round of the LHSAA playoffs as the Vikings lost 4-0 in a one-game series.

Head Coach Nicholas Kennedy said his team was clicking in district play and starting to work together. Unfortunately, the Vikings got cold at the wrong time, but he was still proud of his team’s effort, he said.

“We played one hell of a baseball game,” Kennedy said. “I’m extremely proud of my guys. I’m just ready to get after it. I’m giving them three weeks off and then we are getting after it again.

He wanted to build a culture for his team and grow the players throughout the season. Vidalia got off to a rough start losing six straight games before they started to click and work together.

“They were not given anything. We had to go out there and earn it,” Kennedy said. “They finally started buying into what I was saying. What we were doing in practice was working. Once we got into the district, we didn’t lose many games. Towards district things started clicking, and we started trusting in each other and playing Vidalia baseball.”

Seniors Peyton Fort, Adam Eames, and Brett Wallsworth led the team, he said. Their leadership taught the six younger players, like Luke Williamson, the Viking way. The Viking way is the idea that the name on the front of the jersey is more important than the one on the back.

Kennedy said the team is young, and they are hungry to compete. He said he wants them to play with a dirtbag mentality. When a game ends, the players should have grass and dirt stains on their uniforms from putting everything on the line for the team. He said it is a great feeling to see his team buy into the culture of a family he has created.

“Growing up, my baseball team was my family,” Kennedy said. “I hung out with them. I grilled with them. That is what I keep telling them. We are a family. It is harder to beat up a group of people than if you singled someone out. That is what baseball is all about. One player is not going to win the whole game.”