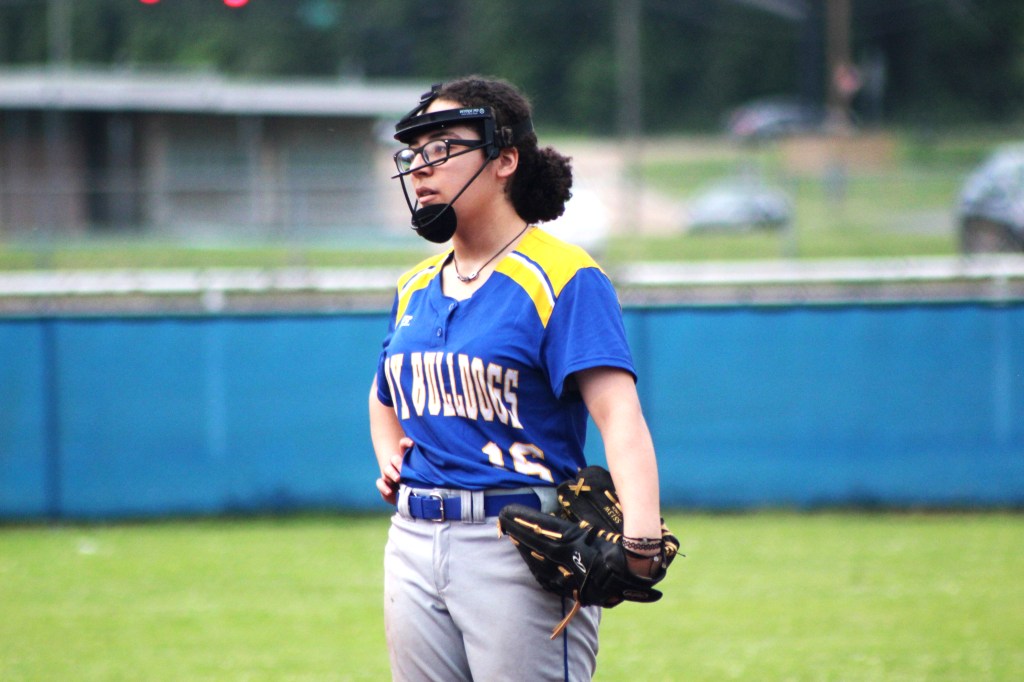 Jaidyn Flowers was the only senior for Natchez High School and saw her season come to an end in the second round of the playoffs. Flowers has played softball since she was five years old. (Hunter Cloud The Natchez Democrat)

Wayne County High School blanked Natchez High School 16-0 in both games to end the Bulldogs season in the second round of the MHSAA Softball playoffs Tuesday night.

Natchez won its fourth straight district championship this season, Head Coach Bonita Hamilton said. Her team persevered throughout the entire year as only students in the hybrid model could play, and they had one senior, Jaidyn Flowers, she said.

“A lot of softball players were virtual and they were not allowed to play for me,” Hamilton said. “I’m very proud of the ones who stayed and came out because we kept every one. We had one senior, so next year we should come back and be even better.”

Flowers said she was happy she got to play this year. She had played softball since she was five years old and will play in the Natchez summer league, she said.

She started pitching for Natchez High School in eighth grade after spending much of her early years at second base, shortstop, and the outfield, she said. The team needed a pitcher, and she was a player the coaches picked.

“They were like ‘Jaidyn, Jaidyn knows how to pitch.’ I was like ‘No, I don’t.’ School ball got me better at pitching,” Flowers said. “I’m glad I could add another position to my softball resume.”

A softball was hit right into her face in the playoffs her eighth-grade year, she said. It scared her, and she said she did not want to pitch anymore in her ninth-grade year. She pitched anyway.

Her most memorable moment came against Bogue Chitto, but the moment brought up memories of almost being hit in the face, she said.

“The girl hit the ball back to me, and I was like ‘Woah,’ and I caught it,” Flowers said. “It flew right into my glove. I got scared I was like ‘oh no.’ It was pretty nice. My dad got it on video. It was the best thing I have done this season. I was scared. It was all reflex.”

Flowers worked this year and balanced a job with being a student and playing softball. She said her job at Applebee’s Grill & Bar is lenient and would give her days off to play her softball games.

Her favorite anime is Naruto, and occasionally she will Naruto run on the field. You Naruto run with both arms straight behind your back parallel to the ground as you lean forward. Around her neck is a necklace that her favorite character Itachi wears in the show.

As she walked off the field one last time as a Natchez Bulldog, Flowers said she would miss Natchez softball. She plans to play summer league softball before heading off to Stillwater, Oklahoma to study Psychiatry at Oklahoma State University and maybe minor in Japanese. She said the Joker from Batman piqued her curiosity about psychiatry.