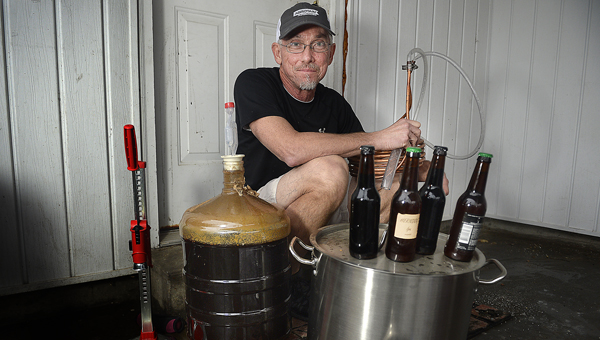 Herndon makes some homebrew beer in a photo taken for The Dart in 2015. Herndon worked for 33 years as a science teacher at Vidalia High School and also coached football and baseball. He died Wednesday morning at 58. (File Photo The Natchez Democrat)

Family was important to Herndon. He had two step-daughters, Paige Franklin and Lauren Franklin, who he raised as his own. He also had two grandchildren, Karter and Addison.

“He was always there for them,” said Jessica Rushing, who is close friends Paige Franklin and was close to Lauren Franklin before she died five years ago. “Karter was like his best friend. They did everything together. He looked up to his poppy. He was the best role model he could have ever had.”

At Vidalia, He worked as a science teacher for 33 years, an assistant football coach for 11 years and a baseball coach for 19 years with one year as a head coach. Vidalia High School Principal Bernie Cooley said he told school staff about Herndon’s death in a meeting Wednesday.

“It happened so fast. It is very shocking,” Cooley said. “We had heard last night that he had been rushed to ICU. This morning we got the news of his passing and it is just tragic. We had a meeting with the facility…We recalled some of the memories of ole Herndon running around.”

He was a vital part of the culture at Vidalia High School, Cooley said. He was a friend, mentor, and confidant as a teacher. Around Christmas time, Herndon would run around the school’s gym to the 12 days of Christmas, he said.

Energetic, steady smiling, and steadily in motion, Herndon would swing a yardstick like it was a golf club, Cooley said. On his breaks, he would practice chipping golf balls.

“He was the type of teacher who was up and energetic,” Cooley said. “He would get the kids involved in it. He would stop and talk to you…He just had a personality that everybody liked. You wish every kid had that kind of teacher in their life.”

Herndon was named Teacher of the Year in his final year at Vidalia High, Cooley said.

After the meeting, Cooley said he watched a video some of Herndon’s students made in 2012. He had touched many lives, including the life of one of his former students Tracy Fleming who taught beside him for a couple of years before he retired.

When she first became a teacher, Fleming was on an “island,” detached building that consists of two classrooms and the library, with Herndon, Cooley said. Herndon would joke that most people did not make it a year out there, he said.

Herndon was more than a teacher. In the summer, he worked as an agricultural consultant with Cecil Parker in Vidalia. For 25 years, the two men worked together.

Before his death, Herndon and his wife, Donna Pat, planned to move to Orange Beach to spend the rest of their years in “their happy place,” a beach house next door to Parker and his wife, Herndon’s daughter Paige said.

Rushing said once while she was on maternity leave from Rushing Boots and Shoes Shop in Ferriday, Herndon came to work there with Rushing’s husband R.D. and refused pay. He was just there to help, she said.

“He did it out of the goodness of his heart,” Rushing said. “He was pure, genuine, and honest. Paige introduced me to my husband R.D., and Lauren always told me that I found my Mr. Tim. She always said she wanted to find her Mr. Tim. There are not many genuinely good people around anymore and that is just who he was.”

In retirement, Herndon managed to stay busy by making beer at home. He told The Natchez Democrat in an article in March 2015 that he got the idea from the show “Good Eats” on the Food Network.

“He just wanted to brew his beers and enjoy life,” Rushing said. “He wanted to enjoy the grandkids, enjoy the beach and just relax.”

Services for Herndon will be 2 p.m. Saturday May 1,2021, at the Natchez City Cemetery.